Yep, my order came in yesterday  :)  I was so excited, and then busy watching the hockey game, so I didn't have time to post it, but I'm not that late  :p  My boyfriend happened to be home at the time of delivery (d'oh!  hate that!  If I want to spend an hour inspecting my new polishes, holding each one up to the light, photographing it and then swatching it on my nail wheel, or hell even putting all my new polishes in a pile and rolling around in them while laughing maniacally - I reserve the right to do so without any snide comments about how I'm losing it  :p)  Thankfully, he spared me any disparaging looks or comments (this time!), and instead was just like, "Why is there more polish??....  so whadja get?"  :) 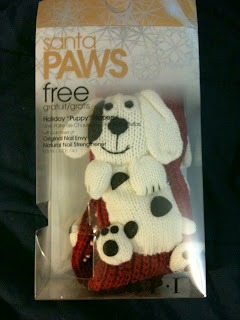 He did laugh at the free OPI puppy slippers I got with my order  :p  They're pretty cute but they do look kinda stupid - which is all the more reason I'm going to wear them all the time  :)  Plus, they're not really slippers - they're more like socks with sticky dots on the bottoms and stuffed dogs sewn on the top  :p  Whatever, sometimes I like being a walking resource for ridicule by my bf  :p  Besides, my cat has taken exception to them and attacks them whenever I walk by.  He's already pulled off a paw.  Yeah, if anyone is gonna spend a whole shiteload of money on Transdesign, like I did, and you're intrigued by the free OPI puppy slippers - sure, get them cuz they're free, but you get what you pay for - they're made like crap.

Hhhhokay, so now I have a whole whack o'haul to show you, but also a lot of swatches.  So I think I'm gonna do them in two seperate posts, since they both contain tons of photos and I don't have enough patience to wait for blogger to upload them all in one go :p  My swatches post will be after this.

Whooo-hooo!  GlittAH!  I love glitter.  I loooooove glitter.  Glittery nail polish is what MADE ME start buying nail polish.  That and blue.  Do you think I would ever be this into nail polish if all they made were pinks and reds, like back when I was a little kid?  HELLZ no! 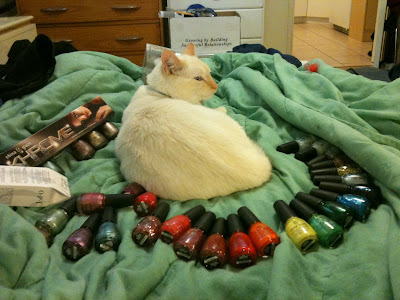 So when I first saw China Glaze's long list of "specialty" polishes they released (I think) last year, they pretty much all immediately went on my lemming list.  And now, zey are mine!  :)  No stores around here have any of these (obvious.  If they did I woulda had them LONG ago) and I kind of put off on ordering them because glitters a.) while pretty, are not practical and b.) are a BETCH to remove, as I'm sure we all know.  But I got over the first problem after drooling over some of lextard's swatches (not affil.  just share her name and taste in polish, and she takes way better photos than me), and I solved the second problem!  Well, someone else did for me.  I'll get to that after the photos.  Which I have a whole LOT of, so bear with me. 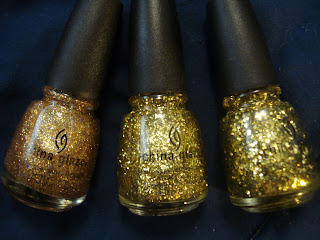 L-R: Cleopatra, Treasure Chest and Solar Flare.  Solar Flare I had from a previous order, but it was in the photo, so too bad  :p 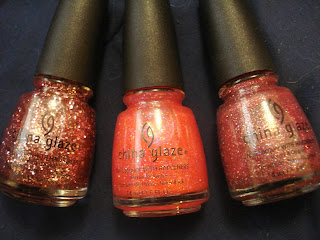 L-R: Glam, Bad Kitty (okay, I admit, I got this for the name as much as the polish), and Carnival Lights. 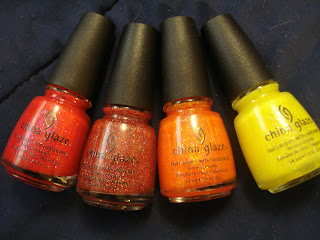 L-R: Moulin Rouge, Dynasty, Dreamsicle and Sunshine.  I thought Moulin Rouge and Dynasty were going to be more similar, based on swatches, but they so are not.  They both have hex glitter, but Moulin Rouge has more of a red-pink jelly base, while Dynasty's is a dusty red with silver microglitter. 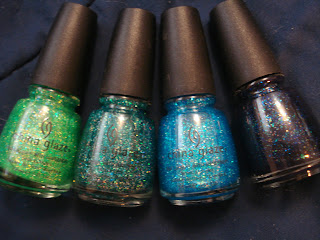 L-R: Sour Apple, Atlantis (also had this from before), Blue Hawaiian and Meteor Shower.  Meteor Shower is one of my faves so far.  Dark blue glitter?  SOLD! 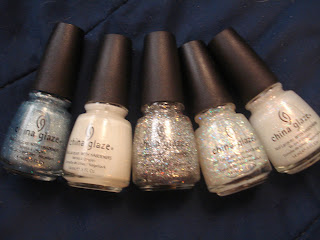 L-R: Luna, Cloud Nine (okay, this is the last one I'm including that I had from before, I promise!), Nova, Snow Globe and Glacier.  Luna seems unique among these glitters, as its the only one with a metallic (silvery-blue) base.  Snow Globe is like a larger version of Glacier (the hex glitter pieces, that is).

Okay, that's it for the glitters.  China Glaze's specialty collection includes 50 polishes.  I have 20  :p  Do I feel accomplished, or something?  Maybe.

I also got some non-glitter China Glaze goodness: 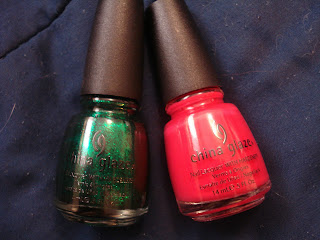 Emerald Sparkle and Heli-Yum.  I wonder if this is the "good" Emerald Sparkle or the "bad" Emerald Sparkle.  I'm pretty sure its the bad.  Which I was expecting, and I'll live with.  I want the good, older formula one, tho :(   And Heli-Yum is the only one of the U&A collection I regretted not getting.  Grape Pop, High Hopes, Sugar High - meh, still not interested in you..... 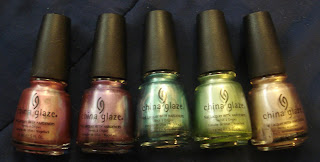 From the Romantique collection.  L-R: Emotion, Harmony, Adore, Cherish and Magical.  Someone, I think Scrangie, said on their blog that these names are so meaningless and interchangeable, like the OPI DS names.  They don't relate to the colour of the polish at all, they all sound the same, and they're hard to remember.  It kind of bugs me.  It seems sometimes - rarely, but sometimes - China Glaze gets lazy with their names.  Maybe they should just number their polishes.  Oh wait, they already did  :p  Anyway, I wonder how these differ from the Khrome polishes.  I heard they do, but I'll have to see for myself.

And the Khrome collection.  L-R: Millenium, Metallic Muse, Sci-Fi, Robotika, 2030 and Hi-Tek.  I heard these are awesome for Konad, which I plan on using them for, along with the Romantiques above.  I hope - no, intend - to own a Konad system in the near future  :)   Plus I thought maybe with these I can fool someone into thinking I'm wearing Minx next time I go out.... you never know, it could happen, right?  Right?.... Shut up. 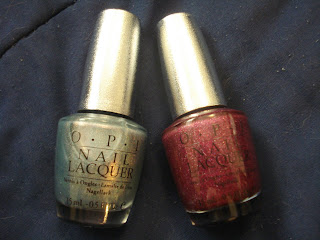 OPI DS Sapphire and Extravagence.  I'm kind of ticked at Extravagence, cuz for forever it was sooo impossible to find, and then of course after I order it I see it in a clearance bin at a salon for less than I paid for it from TD with shipping and all, blah blah blah... plus I could've gotten a different DS, or two more China Glazes.... bah.  Oh well.

Well, that's what I got.  Yes, it was a bit expensive shipping all that to Canada, but do I care?  Nope.  In fact, I intend to get more (bwah ha ha!)  Do I have a problem/addiction?  Yup.  Is it the best, most fun problem/addiction in the world?  Yup.  =)

On another awesome note, Canada kicked Russia's arses in the hockey game last night.  I did a mani for that too, which I'm going to try to keep on till the end of the Olympics.  I'll post that later in my swatches one as well.  I'm an effin artiste!  :)  Go Canada Go!  =)

OH! OH!  Right!  Before I go, I have discovered something that's changed my LIFE.  That's right.  It's amazing!  Do you find glitters require a sort of... irritating... commitment, almost?  Do you have a fear of glitters caused by the incredibly annoying, long, difficult and damaging process of removing them, and thus avoid wearing them?  Who wants to have to be stuck wearing the same polish for a week because it's hard to get off, when you have a stash of hundreds all calling to you and competing for your nail beds?  You all feel me on this one?  Well NO MORE!!!

I present to you (well, LacquerLaine presents to you) THE TINFOIL METHOD!!!

You're gonna have to clicky-click to find out exactly what to do, but it involves wrapping your tips in tinfoil with a cotton ball soaked in remover underneath... it makes glitter come off your nails in one clean swoop!  With no rubbing or hassle!  I have used my own version of this method, using cotton pads and scotch tape (:p I had no tinfoil), and I'm pleased to report it removed Atlantis with beautiful ease.  Beautiful, people!  I am now unafraid of trying ALL these glitters one after the other!  I am set!  =)