Pink Wednesday? Meh. Nicki Minaj believes in Pink Fridays, apparently. I'm sure it has something to do with her music or one of her songs or something, but since I am so perennially uncool/behind the times I am not familiar with either. But this colour is pretty.

In my picture it's showing a little more blue-toned than in real life. While I would say it's a cooler-toned pink, it has much less blue in it than some other spring-release pinks like China Glaze Dance Baby. I probably have two or three or twenty polishes like it, but I was just drawn to its pretty pinkness and had to get it. And we already know we have problems with the whole Not-Polish-Buying aspect of our personality :p. It's actually kind of similar to Pedal Faster Suzi! from the OPI Holland collection but without the shimmer and a touch brighter.

So, yep. I like. Pretty, fresh, spring-y, and I've been loving the way baby pink polish looks against a soft grey top or sweater. Or with this spring's most popular colour for clothing - mint green! :). First it was all the rage with nails; two years later, it's made its way to our clothing. But its fine with me - i love mint green, and its more vibrant, bluer cousin turquoise :) Turquoise/aqua has always been one of my very favorite colours, after ultramarine blue :) Try wearing a mint or aqua coloured top with a pop of this colour on your nails for contrast! Later on in the summertime, I love the way coral looks with mint green, or neon yellow :D (yes I need a smiley there. Colours make me happy :D) but for that soft, pretty spring vibe that's more transitional, try the pink/mint green nails-top combo :)

Okay, I've blathered on enough. Happy Friday! Also, are you taking place in the March Photo A Day thingie? I am. It's good to blow the cobwebs outta the creative corner of my brain sometimes :p. even though I forgot to post yesterday's photo anywhere :p 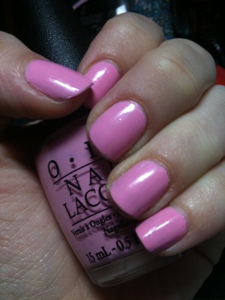