Hola.  I got a whole whack of more haulage to show you.  I told you I went to Secret Nail and Beauty Supply on Tuesday, right?  I thought I did.  Anyhow, I was going back for the rest of the OMG collection, but I ended up coming back with some polishes that I'd had my eye on, a whole shiteload of China Glazes (that display!  All the colours!  It sucks me in like a vortex!) with emphasis on Valentine's Day colours, and a Color Club collection that caught my eye.  Ended up leaving with a lot more than I intended.  Oops.
Here it is: 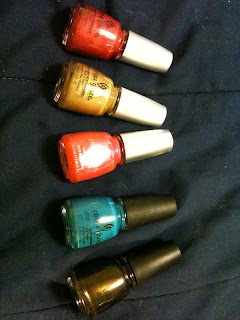 China Glaze in (top to bottom) TMI, GR8, Rio, Shower Together, and Wagon Trail.  Those were the only ones out of the OMG collection that I ended up wanting, I've always liked Shower Together (and the name, hehe) and Wagon Trail just looked friggin cool.  Dark khaki green with gold shimmer?  Yum!  I don't really know why I bought Rio.... oh yeah, cuz I have another Sally Hansen blue-toned iredescent pink called Fiery Skipper that I would like to replace with this, and they look identical in the bottle. 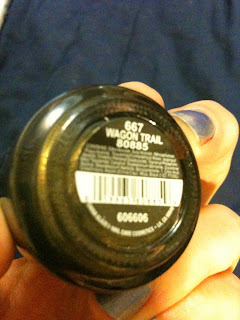 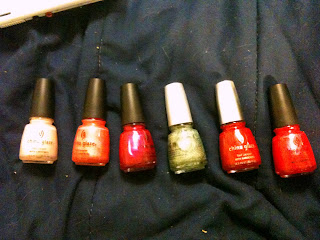 The China Glaze V-Day (ish) polishes (l-r): Heaven, Thataway, Sexy Silhouette, He's Going In Circles (not V-Day-ish but just plain cool), Red Essence and Her Fabulousness.  I was so choked about Thataway - its a warm shimmery gold peach, and I've been lemming peaches of all sorts for spring.  So I was all thrilled when I found it in the "discontinued" bin for 2 bucks.  However, when I took it out to photograph it, I noticed, Huh, funny, the bottle looks half empty.  When I opened it, the polish was all crusted around the rim of the bottle. 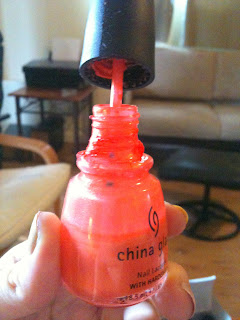 Gross.  So that was obviously not stored properly.  I find a lot of polishes in the discontinued bin look like they're not mixed properly, but I usually pick through them and find ones that are good.  I'm mad at myself for not noticing in the store.  BTW, does anyone know anything about the China Glaze Sun Glaze polishes, that are supposed to change colour in the sun?  There's so many of them at SNBS, and the concept sounds cool, but.... how old are these??  When did CG come out with them?  Sometime in the 90's?  Anyway, moving on... 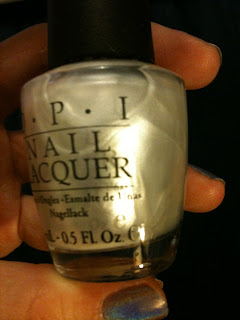 OPI in Kyoto Pearl.  To replace my crappy Revlon Pure Pearl.  I love pearly whites for summer.  Looks so nice against tanned skin. 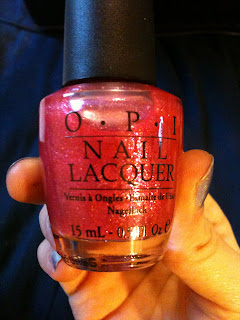 More OPI in And This Little Piggy...  wanted something pink and sparkly.  I don't really own that many OPI polishes - I like them, but they're expensive, and if I can find a similar colour from China Glaze I'll get that instead, but some shades just look so nice... maybe my OPI collection will grow.  I want the entire Designer Series colection... 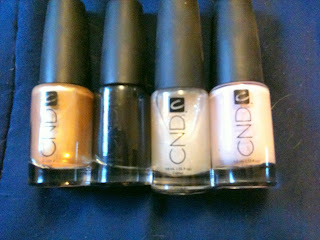 CND polishes in Gold Chrome, Oilslick, Gold Sparkle and Blueberry Whip.  These were pricey too, but I don't own any CND and I wanted to try out the formula.  Plus, they have this whole layering concept they call "Colours and Effects" (someone at CND is Canadian :) or at least spells like one) that I found intriguing.  On All Laquered Up, they were discussing and showing pics of various polishes they layered, with sometimes surprising results. 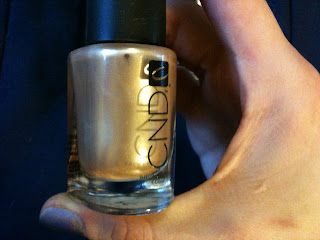 Close-up of Blueberry Whip.  That's a great name - it's the exact shade of blueberry frozen yogurt :) 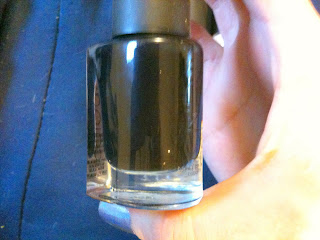 Close-up of Oilslick.  This is a dark, dark teal - it looks black if you don't apply it very thinly.  Which is hard to do because the formula is so awesome and opaque.  CND has a similar polish called Inkwell, which is a almost-black dark blue I think.  Needless to say, I'll probably pick it up next time I'm there  :p 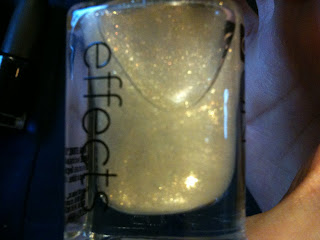 Close-up of Gold Sparkle.  Supposed to be layered over other polishes. I haven't decided what to use as a base for this... something contrasting... dark would work of course.... maybe over a neon..?  Hmmm.... 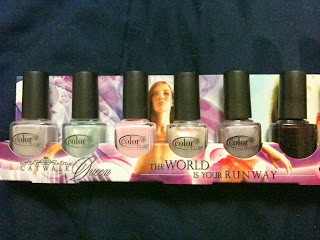 Color Club Catwalk Queen Collection.  L-R: Front Row Diva (soft pearly grey), Runway Muse (iridescent Mother-of-Pearl duochrome green), Vintage Couture (baby pink creme), Ready To Wear (pinkish iridescent duochrome), Fashion Addict (sparkly lilac-grey holo) and Catwalk Queen (deep burgundy purple with gold shimmer).  I love these.  The collection really caught my eye.  I couldn't leave the store without it - i put back other things so I could buy it.  I want the Femme Fatale Collection as well.  Man, I just love Color Club - I think they're my second favorite polish brand.  So far I've only tried Catwalk Queen and Runway Muse, and they're both gorgeous.  I will try to get some sub-par swatches up for you. 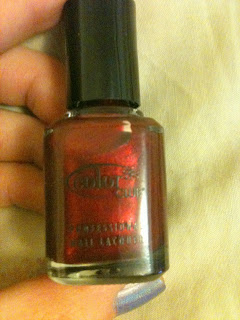 Color Club Mini in I Am Not A Plastic Bottle.  Okay... no you are not.  I don't get the name (well, I get it, but there's not much to get - they just picked a name they thought was clever that had nothing to do with the colour of the polish) but it was pretty.  And I was hunting for V-Day-ish colours.  This is a dark red/burgundy with gold shimmer.  See, some names I think are cute and I some I think are just stupid.  I'm very opinionated and bitchy though.  But you like me anyway.  So I'll tell you what I think of polish names when I swatch them.  For example, I was wearing China Glaze Watermelon Rind yesterday.  Now that's a great name.  That's exactly what it reminds me of.  Other polishes I wish I could name.  Oh, which reminds me: 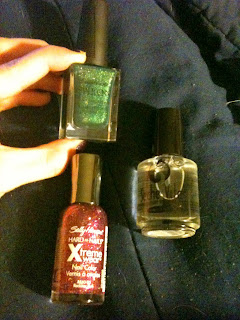 I went downtown to pick up a cheque for photo doubling on Supernatural (yes, I got to talk to Jensen, girls :) ) and I needed to break a 20 for the bus, and London Drugs was right there.  So naturally I saw a couple things to break it with  :p  Clockwise from top: Sally Hansen Salon in Project Runway (green with gold shimmer and green and gold microglitter), Seche Vite topcoat (I finally got, after finding it sold out everywhere) and Sally Hansen Xtreme Wear in Rockstar Pink (dense pink, blue and silver glitter in a clear base - much like Sephora by OPI's Too Good For Him, but with pink glitter instead of purple).  I know what I've said about drugstore polishes, but Sally Hansen isn't as bad as Revlon, and the Rockstar Pink has been catching my eye since Christmas - I'm a sucker for glitter.  I finally got Seche Vite, so I can get the most shine out of my polishes (I like an extremely shiny, hi-gloss finish, like a beloved car that's been buffed and waxed for eight hours).  And the Sally Hansen Salon colour is what I was just talking about.  I wish they had named it Poison Ivy.  That's what is reminds me of - especially the Uma Thurman version in the horrible horrible Batman with Clooney and the Nippled Batsuit.  Laughably horrible movie - great costumes.  Or maybe like a really sparkly Ninja Turtle.  Or maybe my brain's just not working right now cuz its seven in the morning.

That was my haul from last week.  I also went to IKEA and got a Helmer.  Whoo hoo!  Does that make me an official Hoarder?  I'm still trying to organize and catalogue my collection, though - I don't just want to pack them all into a Helmer to be forgotten!  :p  Ideally I'd like to swatch and inventory each one, but yeah right.  I would like to count them and have them all listed though.  I need a nail wheel.

Okay, I have a bunch of swatches to show you. Obviously I started playing around with these immediately  :)  I'll get them all up in the next post.
Posted by AC at 7:32 AM