I know I said I'd post a haul, but first I have to say this:

I don't think I'd ever been in an Icing store before last week... I'd been in Claire's plenty of times - it was my go-to spot for necklaces and accessories when I was a tween and teen, and they didn't have Icing back then.  It was just Claire's and Reflections/Afterthoughts.  Any Canadians remember Afterthoughts? hehehe...

Anyway, some of my very favorite, and first, polishes came from Claire's and Afterthoughts, and since a lot of the trendy np makers of my youth (Hard Candy and Urban Decay) have resurfaced, I thought I'd see if Claire's still had anything to offer.  Or more specifically, Icing, since I'd seen its name being mentioned on my beloved and trusted MUA Nail board  :)


Since it was embarrassing enough for me to even go into the store, I was pleasantly suprised to see that it was worth swallowing my pride.  Icing has some awesomeness!  There were a bunch of polishes that caught my eye.  I actually had to limit myself!  I picked up two of the Limited Edition sets, and four polishes.  I did this without consulting MUA first for favorites from the brand, and just went by what I thought looked good.  whoo, I'm bold!  :p
This below is one of the LE sets.  I just refer to it as "Brights".  The green drew me in, the purple in the middle held my interest, and the gold shimmer in the turquoise sold me  =p  Just like the Claire's polish sets, none of these "minis" have names, which I hate.  I could come up with some kickass names, but i'm no pro and i didn't want to start getting too cute, so for clarity's sake I've dubbed them Green, Turquoise, Violet, Neon Purple and Black  :p 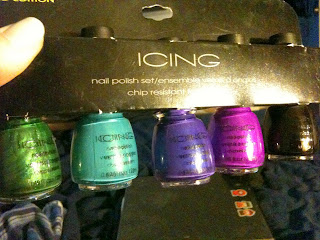 And this one I've dubbed "Pastels".  L-R: Peach, Pink, Mint Green, Blue and White Iridescent.  I know, my creativity boggles the mind.  Maybe when I'm reeeeally bored one day I'll give them all names like Tequila Sunrise and Poison Ivy, but for now, TT  :p 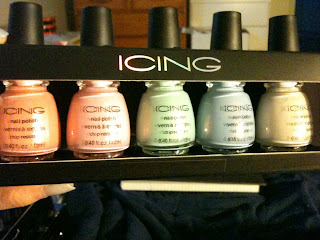 My cat keeps grinding his teeth, and its driving me crazy.  Anyone ever have a cat that did this?  Why?  Is he insane?  On drugs?  ....Anyway, these are the full-size polishes: 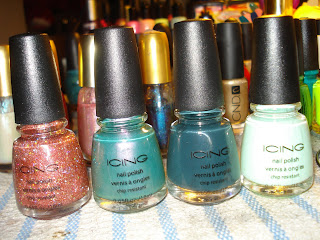 L-R: Paparazzi, Peacock, Manic Monday and Mint 2 Be.  Yes, I now own SEVEN mint polishes (Re-Fresh Mint, MCA, little Claire's pastel set mini, the Mint from the previous Icing set, an unnamed japanese Daiso-brand polish, Rebel Debutante x 2 and this.  Although I don't really consider RD a mint....)  Anywho, these polishes are AWESOMESAUCE!!!  I'm loving both the full-sizers I bought AND the minis!  I think I've heard people complain about Icing's brush, but I find it pretty wide and I love it.
I was bored and these were pretty. So I swatched the two LE sets, one on each hand: 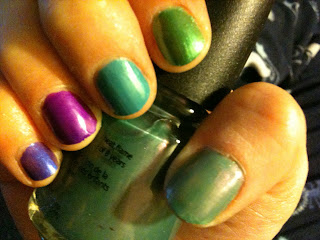 This is the Brights collection (taken indoors), with Peacock on the thumb, and Violet, Neon purple, Turquoise and Green from pinky to index.  I didn't swatch the black, cuz, well, it's black, so I have no idea about that one, but who's gonna buy this set for the black, anyhow? 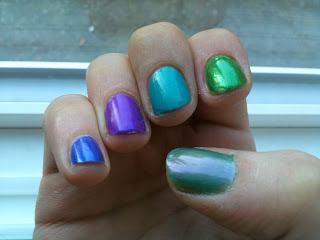 And in natural lighting.
The green one I LOVE, and will talk more about below.  The Violet on my pinky is true to its real life colour in the first pic, and is also very pretty - a royal blueish purple, or blurple.  I'm very into this shade lately.  The Neon Purple I'm kind of "meh" on, since I'm getting sick of purples in general and this just reminded me of my ChG Flying Dragon/CC Power Play/Sinful Dream On, and all those other neon purples.  it was the only one that dried matte, too - which I remedied with some Seche.  I'm so over matte.  Blah.  And the turquoise is nice too, but the gold shimmer is a little more subtle than I'd hoped for. 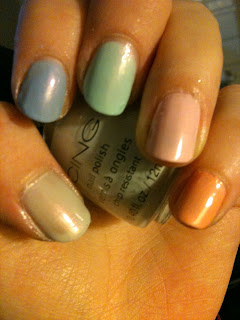 These are the pastels indoors. 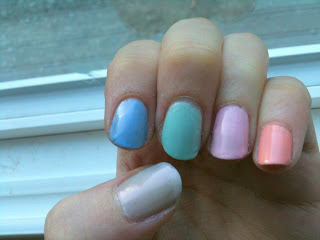 And in natural lighting.  Aren't they preeeeetty?  Mint green and peach are two other colours I'm really into for spring, so I had to get this set too.  I honestly couldn't decide between this and the brights.  So they both came home with me!  =)  The blue is also very pretty, and the iridescent has enough power to stand on its own, but methinks it'd be a great layering polish too... its base has a slight blueish tint, and it shimmers gold and pink.  None of which you can tell by these pics  :(  Oh well, I'm telling you - if you like spring-y pastels, this is a nice set.  Take my word for it.  Get it.
I've only really tried on two of the polishes, other than these swatches, but I've been pretty happy with them both: 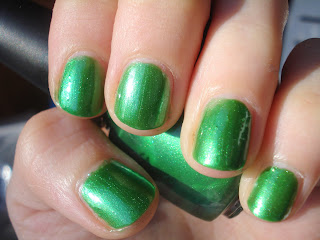 Icing Unnamed Green from the brights set.  This looks soooo familiar!  I'm going to have to consult the board on this one, but I swear this looks like a dupe to something, and I can't remember what...  It bubbled a bit on my index and ring fingers, but I think that was my fault from scratching the surface of my nail while removing  ChG Atlantis.  Then again, I had CND Ridge Out on underneath, which has been working pretty well so far.... hmmmph.... 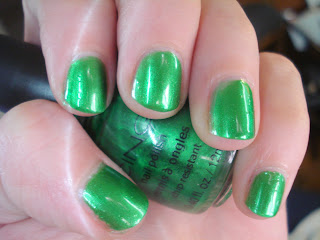 In sunlight.  Man, this is pretty though.  A bright, juicy, shimmery green, more yellow-based than blue.  I think it looks pretty good with my skintone.  But what is it a dupe to?.... this is going to bother me.....
And the other one I've tried: 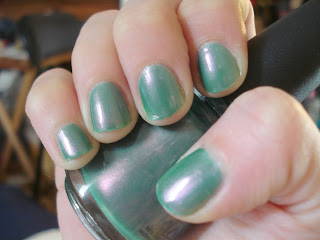 Icing Peacock.  This is lovely, and its so sad that my camera refuses to capture the loveliness of it.  Its a pale jade green with PINK duochrome shimmer.  So unique, so awesome.  This also applied nicely and was opaque in two coats.
You can kinda see the pink in the sunbeam, here: 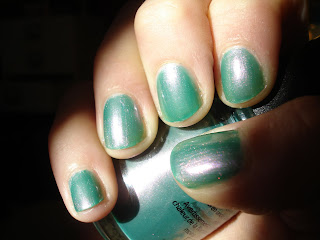 Well, sort of but not really.  On the thumb, anyway.  And in natural light: 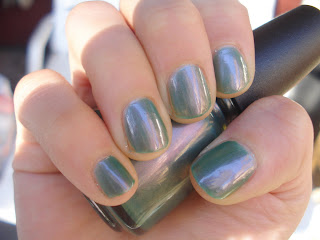 I tried all kinds of settings and walked around my house to different spots for about twenty minutes trying to get a good pic of this polish.  I wonder if anyone else knows of its pink-iridescent goodness - I did a board search on Icing after I got back, and I read in a thread somewhere that this is a favorite, but I couldn't find anything else.  I hope it is a favorite - this is sooo much prettier and more unique than another stupid boring shimmery deep purple   =P  J/k.  Don't throw things at me.
So these Icing polishes are intriguing.  They're not what I'd call cheap, at 5 bucks a pop, and the sets are downright pricey (pretty much 20 bucks each, which is how much I pay for Color Club sets).  But so far the quality is not half bad.  There are a bunch more I want to go back for, too - Blackout, Roger That, Laura's Fave and Blue Goose were all ones I looked at, but put back.  And there was a mini LE set with glitters in it too - they had a turquoise glitter in it that looked fab.  I curse Icing for being so close to me, which makes it pretty much inevitable thast eventually I will own every last polish in it that I even remotely like  :p
So that's all for right now.  I may or may not have to drive a close friend to Squamish (right through all the Olympic traffic, blarg) to pick up his forgotten wallet.  And I really dun wanna.  So I have to wrap up this post.  I would like to show you my ChG Atlantis mani - hopefully when I get back.
TD order with ChG glitters is almost here!!  :)  :)  :)
Posted by AC at 5:14 PM