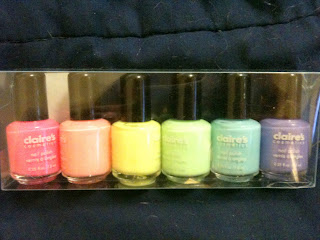 Aren't they nice?!  They don't have individual names.  Which is weak.  The bottom of the box says, "Pastels".  So I guess this is Pastel Pink, Peach, Yellow, Green, Blue and Purple, from left to right.  (really?  thanks lex.  that was very informative... :p)  So pretty... like sherbet colours.  A tad pricey, at $15 for six mini bottles... after tax they were around $17.  Yikes.  But, so pretty......
I was most taken with the peach, the mint green and the pale blue.  But that's just cuz I'm really into peach and mint green right now and a blue will always call my name.  I couldn't decide which one to try first after I got home... I swatched them all on one of my new nail wheels (wheee!) and found that the light blue is almost an exact dupe of Color Club's Blue Light, and the purple is very similar to China Glaze's Secret Peri-wink-le, except SP-W-L is a creme and the Claire's polish is a satin frost.  Do you want to see?  I know pics of my nail wheels are lame and not as good as acutal nail swatches, but I'll show you later anyway, if I can.
Anyway, I settled on the mint green: 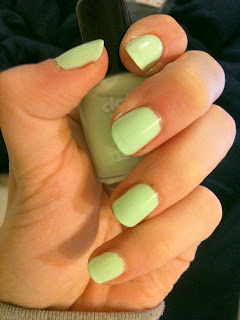 *drools uncontrollably* (slurp) This is a lot more neon than is showing up in this pic.  It's like a neon mint.  Which is a dumb description but the only one I can think of.  It's not too minty or too lime - a perfect balance between the two shades.  And BRIGHT.  I would almost classify this as a neon - without that icky dull matte finish that all neon polishes are cursed with!  Perfect!  This is two coats in the pic - I didn't even use any Seche yet!  The first coat was streaky and a PItA to apply, but all smoothed out with the second coat.  I gave it a long time to dry in between the two coats though.
Yeah... I seriously have a problem.  A nail polish addiction.  I have collected many, many things over the years, with varying degrees of ridiculousness, and this definitely nears the top of the list.  One of our friends poked his head into our bedroom to say "Bye" to me the other day after the hockey game (I was sitting on my bed typing on my laptop), saw this: 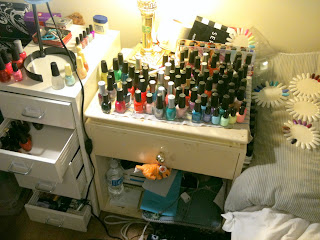 and was just like, "Holy sh*t, is that all nail polish?"  And I sheepishly was like, "Yes, I have an addiction, I know, I'm just sorting them to put them all away" (gestures to helmer).  Yeah.  It's sick.  My collection has quadrupled since Christmas.  And I had about 30 to start with that I'd just collected over the years.
Okay, so I'm TOTALLY serious now - NO-BUY until after TD order arrives!!  Unless its like a golden diamond nail polish with rainbows flowing out of it carried on the backs of unicorns that paints out money and will solve all my lifelong problems <-- quote from my boyfriend.  Like he's one to talk about obsessions.  This is his DVD collection that lives in our spare room: 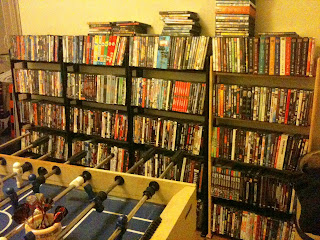 Yeah.  Words are not needed.

So what are you doing this weekend, world?  I'm probably playing poker tonight, as usual.  Tomorrow there's a hockey game at like eleven am (!) (stupid east-coast schedule :p) and then there's UFC 106 that night at seven.  And I have to go to my drugstore to get my free makeover  :)  And then Sunday is the Superbowl.  I could care less about football - I'd be hard-pressed to name more than two players on any given team, sometimes not even that many - but for some reason I always watch the Superbowl.  Always have.  And its an excuse to procure and devour yummy snacks and appies  :)  Saints, Colts, whatever - pass the crab dip  :)

So I've got a busy weekend.  Rest assured though, nails will be did and photographed.  I'll probably even put something different on them before I go play poker.  I wish I owned Color Club's All In  :p  I'm thinking something bright and distracting for when I'm playing cards tonight, some kind of dark colbalt blue for tomorrow, possibly with glitter, and then some kind of home-concocted dupe for $OPI Go With The Flow-er for Superbowl Sunday... maybe that's when I'll do the Orly Swizzle Stick with CND Gold Sparkle...?  Maybe more of a coral colour with Gold Sparkle?  Maybe a peach like the Claire's one, or China Glaze Thataway with CND Gold Shimmer layered overtop?  Maybe its time to break out the Color Club Glitter Vixens?  Maybe just Bling Dynasty or JITNB from the OPI HK collection?  Maybe a chance to finally wear Absolutely Alice?  Aaaaah!  So many choices!