Well, I think I've realized that a no-buy just isn't realistic for me  :p  So I've decided to change it to a low-buy.  I was very sick last night, btw, and I still feel really out of it from all the icky medication I took.... :p so I'm going to keep this brief, or at least try to, lest I come off sounding like even more of a babbling idiot than usual...

So I confess, I went to the drugstore specifically to pick up Essie Wicked - for some reason, I don't own any vampy, blood red-blacks, which is strange because that's always been one of my fave polish colours, ever since the whole Chanel Vamp era when I was in seventh grade  :)  I have Misa Love Bite on the way from TD, but I can't wait that long... besides, I've heard that Wicked is one of the best red-blacks out there, so I may as well pick it up.  I don't own very many Essies, and I'd like to change that....

So I picked these up: 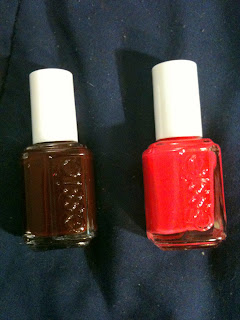 Essie Wicked and Essie Watermelon.  Wicked is just what the name says - dark, opaque in one coat blood-red, burgundy creme, and Watermelon is a bright coral pink creme that's a lot darker than I thought.  It's almost red.  I don't know what I think of it yet, but it looks almost out of place among the pinks on my nail wheel...


Where was I...?  Right... I was about to go pay when I noticed two new collection displays by the register.  One was a new Sally Hansen HDcollection (was it the Tracy Reece one?  I can't remember... I wasn't terribly impressed by any of the shades I saw though...  They looked nice and bright, but unoriginal) and the other was a new Nicole by OPI collection.  Nicole polishes are okay - I haven't had any major problems with them, and they occasionally have colours that I can't find anywhere else.  So out of the 13 colours they had, I picked out the three that I liked most: 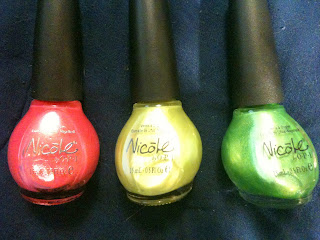 Nicole by OPI in You're An Angel, Lemon-Lime Twist and Make Mine Lime. 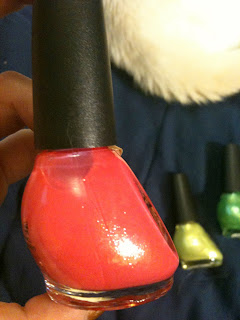 You're An Angel is a sparkly pink shimmer with gold glitter - similar to China Glaze Strawberry Fields, but lighter pink.  (Excuse the white fluffy blob in the top right corner.  That's my kitten, Sid Vicious.) 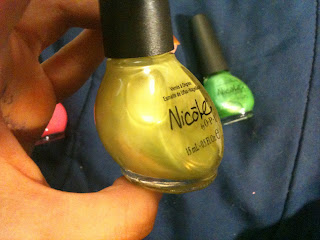 Lemon-Lime Twist is a shimmery chartreuse colour, with almost a metallic sheen to it. 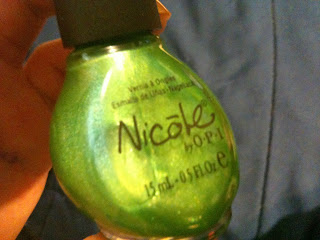 Make Mine Lime is a sparkly lime green shimmer.  Reminds me of Sour Apple Jolly Ranchers, or something.  I'm looking to expand my collection of greens, and I was looking for a shimmery, frosty green like this.  I also want a dark green creme, and a shimmery forest green... What I would absolutely love as well would be a green/gold duochrome... years ago I had a Revlon StreetWear polish that was a green/gold duochrome shimmer... there's gotta be something out there like that.
And quickly, here's what I did to my nails for Superbowl Sunday, even though I only got to watch half the game: 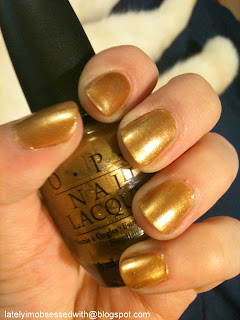 OPI Bling Dynasty.  Pretty gold polish.  Shiny even without a topcoat.  And hey, just happens to match the Saints' colours  :)
This is being posted a day late.  I forgot to hit "Publish Post" last night before I fell asleep.  Oops  :p  I have more stuff to show you, but it will have to go in the next post.  Did anyone else watch the Superbowl?  I'm glad the Saints won.  And the Who sounded horrible.  Later  xo
Posted by AC at 9:53 PM