More stuff I've gotten lately.  Part of the never-ending haul that my life has become  :p

I got this stuff from TD: 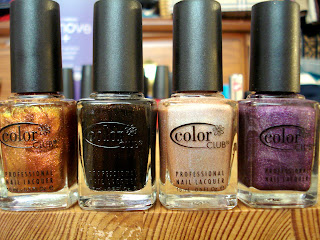 Color Clubs in Wild And Willing, With Abandon, Love 'Em, Leave 'Em, and Wild At Heart.  WAH I got in a swap, but I wanted to include it here with its family.  These are the ones from the Wild At Heart collection that I was interested in - I passed on the two frosty jewel-tone shades.

Misas in Confection Section, Ghetto Fabulous, Let's Go Green, A Sunny Smile Makes Me Go Wild, and Bikini With A Martini.  BWAM is a tad more fuchsia than red.  I have some more Misas coming in a swap, too - when they get here I'll photograph them all together  :) 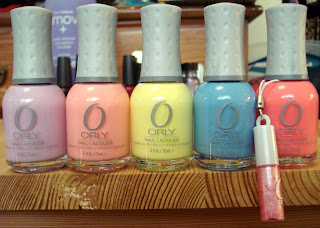 Orly Sweet collection in Lollipop, Cotton Candy, Lemonade, Snowcone and Pixi Stix.  I have Gumdop coming in a swap as well :)  Only Pixi Stix came with its little lipgloss, even though they all should have since I ordered them seperately, but I'm guessing supply is running low since these have been out a while now.  Anyway, I don't care - I love the Pixi Stix one, and the only other one I would have worn is obviously Cotton Candy.  Which would have looked gross on me anyway.  I don't wear much lip stuff, including gloss, cuz I have giant lips and I think 99% of it looks worse on me than none at all.  It's sad.  Ahem.  Anyway, these are really pretty.  I haven't gotten around to wearing any yet, but my Orly lemming has quieted down for awhile - I've gone from owning four to around thirty! 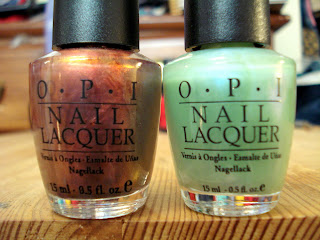 OPI Merryberry Mauve and Maliblue.  Two dc'ed, kind of htf OPIs.  I didn't know TD had these - why are people charging $20 for Merryberry Mauve on ebay?  Huh.  Anyway, I now own the polish and the glitter topcoat! :)  I should try them together. 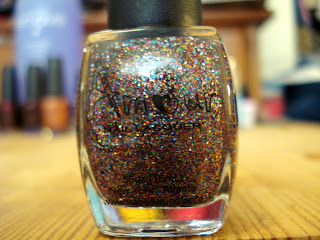 Amour Rain Glitter.  This was recommended to me on the NB and it's very rainbow-y and sparkly.  I need to try it.  Man, I have so many I need to try!  I wonder what colour I should use as the base...? 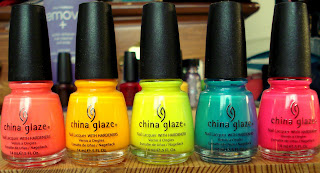 China Glaze Poolside!  L-R: Flip Flop Fantasty, Sun Worshiper, Yellow Polka Dot Bikini, Towel Boy Toy and Pool Party.  No Kiwi-Cool-Ada, since stupid TD was sold out of it at the time of my order (of course, they got it in the next day and have had it since).  I don't really mind, since it looks like a dupe for CC Limelight.  As a matter of fact, a lot of these seem dupey; if you ask me, SW = CC Explosive/Psychedelic Scene, YPDB = ChG Celtic Sun, Misa A Sunny Smile Makes Me Go Wild, TBT = CC Pure Energy, ChG Sky-High Top, and PP = one of the various CC pink neons.  I fully intend to do a comp post.

The only one of these I've worn - and absolutely LOVE - is Flip Flop Fantasy.  This is a gorgeous bright neon coral orangey pink.  It's screaming to be on my toes.  I will post pics! 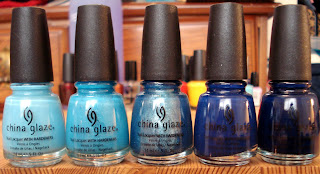 China Glaze Bahama Blues collection.  L-R: Bahamian Escape, Carribean Blue, Blue Island Iced Tea, Bermuda Breakaway, Calypso Blue.  I love blue - it is by far my favorite polish colour, and this collection is all ranges of it.  Once again, there was a frosted shade that I passed on.  A lot of frosts just look dated to me lately.  Anyway, I owned a polish identical to Bahamian Escape when I was about twelve... I wish I could remember the brand.... it wasn't a well-known one.  Because of this, BE has been a long-time lemming of mine - I've wanted it ever since I first started looking at swatches of ChG back in December, when I didn't own any, and probably only owned about thirty nps in total.  Wow, I've come a long way.

Oh, and last, but not least - the free stuffed puppy that came with my TD order: 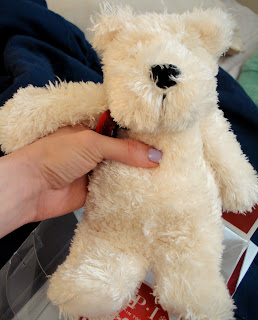 Cute?  I think I got one of the last ones - it's not on the page anymore.  I'm gonna end up owning ten thousand pairs of those Holiday Puppy Slippers, though  :p

Now, other stuff.  These are the long-awaited Reveries from Spaboutique.ca:

L-R: Adina, Lana, Happi, Reece, Laney, Gwin.  I'm obviously very late to the party on these, and everyone else and their monkey has reviewed them already.  So I'll spare you. 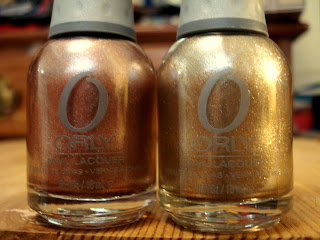 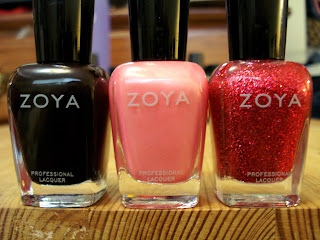 And some Zoyas: Casey, Emme and Astra.  I have Astra on my toes right now, and it's such super-sparkly goodness!