So, went to Sally Beauty Supply on Friday (drove my ass all the way out to - ugh - Surrey) and got a whole whack of stuff. I meant to post as soon as I got back but it was the weekend and, well, I had better things to do than update a blog that no one reads :( How does one get followers, anyhow? ;...(.........


Anyway (sniff, sniff, wipes nose), wasn't too impressed with the selection at Sally's. The brands they had that I was interested in were the China Glazes, Orly, Finger Paints, Savvy and Nina Ultra Pro, but the selection kind of sucked - a lot of the polishes on my want list weren't there. And everything was sort of overpriced. But anyway, here's what I got... 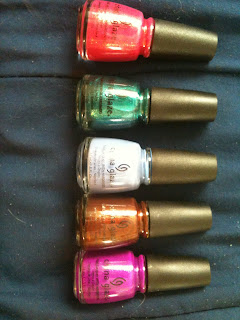 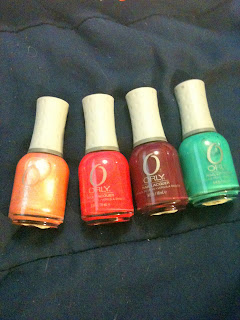 Orly in Opal Hope (I blame Scrangie for this one), Swizzle Stick, Plum Noir and Green With Envy. 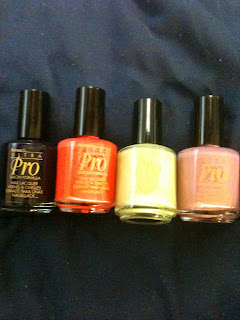 Nina Ultra Pro in Out Of The Blue, Tangerine Dream, Mermaid and Sweet Nothings. 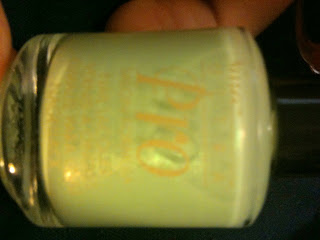 Close up of Mermaid. It's a pale mint green with gold shimmer and a slight duochrome effect. 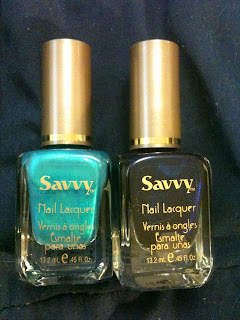 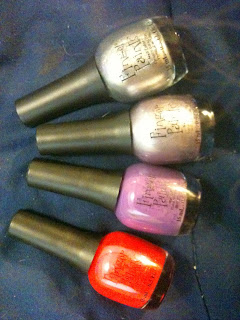 And finally, Finger Paints in (top to bottom) Easel Come, Easel Go, Silver Sculpture, Lavender Highlight and Curator's Coral. I wanted ECEG because I don't own a really foil-like silver, and I'm not paying for Minx (I'd rather invest in some Konad first). I haven't worn it on its own yet, but it looked really really shiny. I like shiny things :p

And now, some skittles swatches: 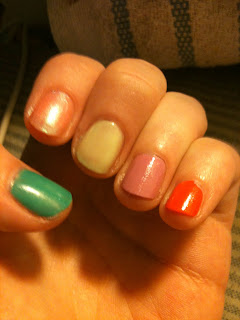 Thumb to pinky: Orly Green With Envy. Orly Opal Hope, Nina UP Mermaid, Nina UP Sweet Nothings, Nina UP Tangerine Dream (much darker and more coral than in the bottle). Pinky to thumb: Sally Girl Mini nail color in Champagne Kisses (yeah, I totally forgot to take pics of these - I got five mini polishes at Sally's too, cuz, hello, they were 99 cents. I'll post one later), China Glaze Watermelon Rind (love), China Glaze Secret Peri-Wink-Le, China Glaze Flying Dragon (so disppointed in this one. The finish is matte as hell, and the red and blue glitter doesn't really show up, it just makes it appear kind of murky. I wouldn't even call it neon. It's not bright and glossy like I so wish it was. I didn't get the heads up on the matte-ness of the INK collection until after I'd ordered them. Ah well. A super-glossy patent top coat might salvage it...) and China Glaze Strawberry Fields (love love!)

Out of all of them, my faves so far are Watermelon Rind and Strawberry Fields. China Glaze rules with its colours, as usual. I did a manicure on my sis for the weekend in SF. I forgot to take a pic (yeah, I know, get a brain) but it looked amazing. Juicy pink laced with shimmery gold. Drool. I don't own anything remotely like this. I love any polish with a gold shimmer.

I also am loving the formula on the Finger Paints polishes. I wore two of them over the weekend and was impressed with them both all night. You want to hear all about it, don't you? Of course you do ;p Okay fine, I'll keep it brief. Friday night I went to a friend's house to play a game of poker. Looking back, I wish I owned Color Club's Poker collection, with all the poker-inspired names... I play poker all the time and would love a poker-inspired collection.... hmm, note to self for Transdesign order. Anyway, I was wearing a very neutral oatmeal-coloured Fair Isle cardigan and wanted something punchy to brighten it up, but on trend at the same time. Since I live in the 'burbs and we're about a year behind on all trends (with the exception of yours truly, naturally) I decided to go for good ol' purple. Lavender Highlight looked great on my nails all night, and I literally threw it on five minutes before we were out the door. Except for a small smudge on my right thumbnail (from putting on my jacket) it dried pretty fast and was opaque in two thin coats. I didn't bother photographing it though - my app job was that horrible. All over my cuticles that I had to just rim off with my thumbnail in the car. Terribad. But no one but me could tell.

Saturday we just had some friends over and watched a hockey game. I wanted to wear something bright again, and it was Saturday so I wanted a sexier colour (I don't know) so I reached for the Curator's Coral, since it would contrast nicely with the Canuck colours on my jersey (dark blue, green and white, for those unfortunate enough to be unfamiliar with greatness.) 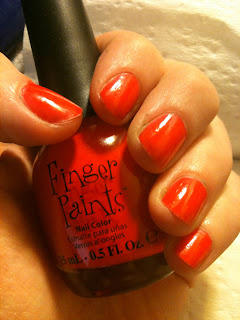 Great choice. Just what I wanted. It glowed pretty vibrantly on my nails all night. And since I had to apply it really really fast during first intermission (hence the shite application job, which you'll forgive cuz you love me), it dried fast enough for me to return to the party without anyone missing me (my boyfriend what know right away what I was doing :p) I know, I've become some sort of closet polish junky. I must moderate myself.

Hehe, and on that note, I have another massive freakin haul to show you! Cuz yesterday, I went to Secret Nail and Beauty Supply again! That and probably another random NOTD comin at you, if I can. I did have stuff I wanted to do today - call my mom, pay my phone bill, mail a letter, possibly drive all the way downtown to pick up my cheque - which I'll do tomorrow if I can - and I really really wanted to go to IKEA to get a helmer or even just Wal-Mart to get a plastic drawer storage unit... but I'd rather go to IKEA. Then I could see if they have wall racks for my polish, and I don't care if the bf objects :p Then again, he took the day off today just to take it easy (and to spend it with me, I assume), and since I do love him so, I'll probably put off IKEA to hang out with him if he doesn't want to go. Ah, l'amour.
Posted by AC at 2:43 AM