Mad Men and Off With Her Red!

So the other night the bf and I went to a Mad Men-themed party. Y'know, they wanted everyone to dress in 1962 clothes and shiz. So what did we do? Hit up Value Village of course! :) I ended up with less of a Betty Draper outfit and more of a Peggy-inspired one, but it worked. Then, it was time to do research online as to hair and makeup!

Hair was a total loss, since I have looong hair and no one, absolutely no one had long hair in the early sixties. It was all bouffants, beehives and poodle perms. Lots of teasing. Ugh. Since I'm not about to cut my hair, I just went for a Veronica Lake 'do, which lost its curl about ten minutes after I curled it. Sigh. Such is my hair.

Anyway, on to the fun part - the makeup. I went with a very simple eye with a nude base and fawn in the crease - all matte of course. I did a very subtle contoured cheekbone in a buff colour, and then lined and filled in my lips with a brick-coloured pencil and applied a really old red CoverGirl lipstick - cuz it was the only red I had. My makeup collection is sad. I've just gotten interested in wearing makeup again. I've never really worn much, but have always enjoyed playing around with it. I like painting :)

So I thought, what else would a sixties housewife wear on her nails for an occasion (and what better to go with my red lips) than a bold, creamy, awesome, fire-engine candy-apple red? 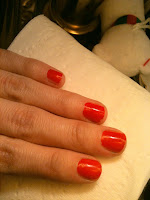 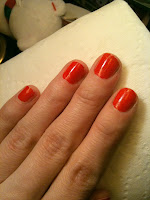 Enter OPI's Off With Her Red! Which I like a whole lot more than I ever thought I would. Its much brighter on my nail than it appears in the bottle - in the bottle, it looks like a muted brick red. On my nails, its more fiery and tomato-y (which is how OPI described it, I think...). Its an orange-based red, so it flatters me more than a blue-red.

Here's my final look. Sorry about the blurriness. 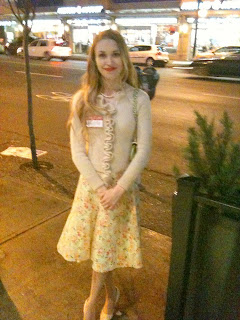 Ah well. It was lots of fun. Now its time to take the Off With Her Red! off of my nails! (I know, I'm not funny) and decide on what to do next. I don't know what I"m in the mood for and god knows I have lots to choose from. Till later.
Posted by AC at 3:06 PM