NOTD: Playing with my pens...

So I couldn't decide all evening just how to do my nails - I have about a billion ideas, but only ten nails. Wow, I'm such a dork. Anyway, I ended up doing this to my nails: 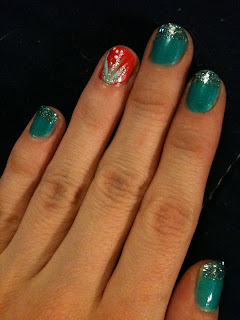 Yeah, I was just playing around. I'm not really satisfied with the way this looks. I don't think it looks bad, per se, but... I dunno. I did the ring finger as my accent, and played around with a design I copied from the back of the Art Club box. 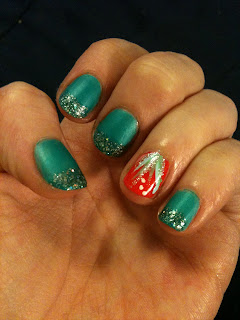 That was before I put the Top Coat on. Left hand: 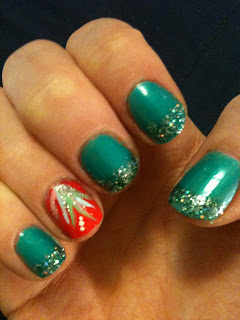 The colour on the rest of my fingers is the China Glaze Turned Up Turquoise, with a Claire's Green Confetti glitter on the tips. The Turned Up Turquoise dried unexpectedly matte, which you can see in the second pic before I put on top coat. Some people like this, but I don't particularly care for it (I'll post later about nail trends and what I think of them). The base colour I used for my ring finger is an old L'Oreal Bijou Gems polish in B. Powerful - its a bright, bright coral fuschia, but it looks more orangey-red in this pic. Soon, I promise I'll start taking pics with an actual camera instead of being lazy and using my iPhone camera :p The colours in the little seaweed-ish design are Art Club Pastel Blue, Art Club Mint, Art Club Pink Pastel (side note: my Pastel Art Club set came with TWO Pink Pastel pens - TWO of the exact same friggin' colour, in one set!! What the eff, Art Club?? What a ripoff! The hell do I need two Pink Pastels for??) Art Club Fine Silver Glitter, and Art Club Satin White for the dots. Yes, I got a little carried away, but I think it looks okay.

I also convinced my sister to let me paint her nails, which is pretty unheard of - my latest obsession must be rubbing off on her, as she normally doesn't wear nail polish, and rolls her eyes at my enthusiasm for it - and anything really. Just like a lot of younger siblings, she loves to pretend everything I do or like is so lame, yet she's the first one to copy me and act to her friends like its her idea (or nail polish, or sweater, or joke, or band, etc.)

She first painted her nails with an opaque baby pink creme NYC polish (doesn't have a name, just says 108A) but then was like, "Ew, I don't like this, it looks like I painted my nails with white-out and then coloured them with marker." I was like, and you'd rather it be sheer and see-through? And she was like, "Yes!" And I was like, well, y'know, some people like the opaque, creamy polish... I personally don't mind sheers if you want a barely-there look, but I really prefer polishes that take one, maybe two coats to achieve bottle colour. Anyway, she was going to go for the neon purple Color Club Power Play, but then I ended up doing this: 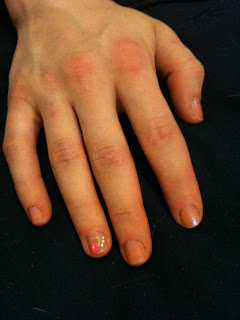 China Glaze in Afterglow. A really pretty polish. Looks like an iridescent sheer pink, but reflects purple, blue and even green in various lights. My sister was like, "Yes! That's exactly what I was looking for!" I even convinced her to let me paint just one accent flower on the ring finger of her right hand: 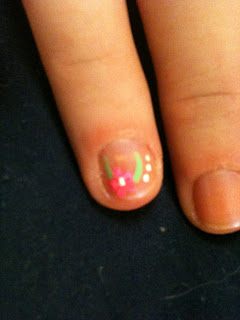 I got to practice my flower-painting skills :p They could use some work. Also, I'm aware what absolutely embarrassingly horrible quality these pics are. This one's so blurry you can barely even see the quality of my flower :p Just kidding. It's a passible flower. I need a lot more pratice. Don't tell my sister I said that. It actually does look pretty good. I used the Claire's two-way nail art pen in pink for the flower, Art Club Satin white for the centre and dots, and Art Club Mint for the leaves. OPI top coat over everything, o'course.

We'll see how long my nails stay like this for. Probably till tomorrow morning. Everything but the ring fingers, at least. Well, I guess there's more where that came from...