I don't like the Giants and I don't like the Patriots. But both teams have the same colours - red, blue and white - so I couldn't miss either way :). I don't even really like football, tbh - I like it more than baseball, which isn't saying much - but the game turned out to be way more exciting than I anticipated. I actually watched it. Now that's saying something :p

Sorry I haven't posted in forever. I'm aware of how lame this is. My computer still is having problems though and, well, YOU try blogging from your phone. It doesn't work very well. I'm using the Blogger app right now, because the BlogPress app - that I paid for :( - isn't letting me publish anything. It says "it seems like your network is not ready for posting.". Wtf. Why the hell not?

I hate this Blogger app. It sucks. I can't even post a picture in the middle of my post - it appears at the end. How shite is that?!? Truthfully I don't even know if this will publish. But you c here for nails, not bitching and moaning, so here it is.

The red nail is Zoya Sooki topped with OPI Crown Me Already. The blue is Essie Mesmerize topped with the same OPI, and the white nails are Sally Hansen Insta-Dri Whirlwind White topped with LA Girls Glitter Addict Animate and Jostle.

Hope you had a happy Superbowl weekend! 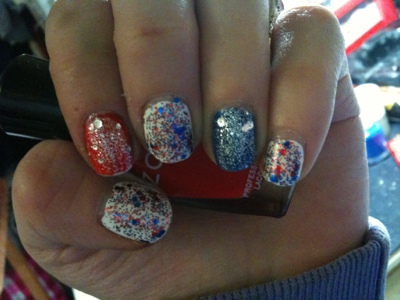