Hi all! Did you have a good weekend? Mine was.... okay. My no-buy is going rather well so far - :D yay me! :D - but I'm getting paid on Wednesday, which means I'm going to have to pick up the Vintage Vixen colours I want (the entire second set, plus Ingrid). I'm really chomping at the bit for the Orly Cosmix collection as well as the ChG Awakening one for Halloween. I need all of those Orlys :p Oh, and that MAC Venomous Villains collection, as well! Not only am I a sucker for Disney-themed nail polishes (yes, I know, Disney is evil, but dammit I love those movies :p), but they sound so, so awesome from the promo descriptions....

Anyway, this is what I had on my nails all weekend - Nubar Gem. I just recently acquired some Nubars in a swap :) so this brand is fairly new to me. I had it on aaaaallllll weeekend, so please excuse the chips. The wear was actually pretty good considering I was doing stuff with my hands - cooking, digging through things, ripping things open, splashing around in water... major tipwear, but that's because my nails are so short that I have a really hard time wrapping my tips, so I just skip it... This pictures really are quite hideous, but I wanted to tell you about this polish, cuz it really is so pretty... 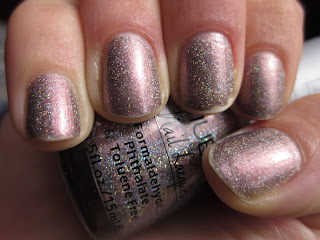 The base for this holo glitter is sort of a beige-pink duochrome. The glitter is very dense and has a very pronounced prismatic effect. Making this polish a holo. I luuuuuuurve me some holo. 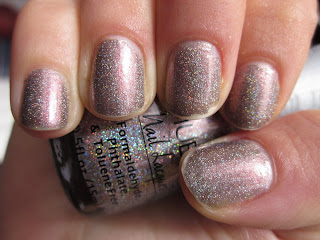 Yeah, I love this polish. It's definitely a winner. Usually I'm not the hugest fan of neutral coloured polishes, and at first I thought this would just be another beige holo like ChG FYI, but the duochrome base and the density of the holo glitter make it very unique. I also received Spark in the swap, and that's more like FYI - the glitter is not the same. They got the glitter just perfect in these Prism polishes -had they decided to put this glitter in a charcoal-coloured base, we would have easily had an original MPJ dupe. I want the rest of these Nubar Prisms - I have only Gem and Jewel. And I need the Sparkle collection. And the duochromes. Man, how did I not own any Nubars before?!

I'll be back later with my "My New Favorite Things" post.  Things of course all being polishes  :p