The Drugstore That Time Forgot.... Plus A Couple Swatches

Sorry, I'm not having a lot of time to post lately - my bf's cousin is in town and staying with us for a week.  She expects to be entertained.  So I'm having to go out and actually do stuff instead of hauling and blogging and sitting on my ass inhaling polish fumes.  Tough life.

So this morning I was killing time waiting for my boyfriend to come out of the Medi-Clinic (he hurt his knee while we were on this BRUTAL hike yesterday.... yes, I actually exercised :p  I know, I know - pics or it didn't happen.  See the end of this post :)  Oh, oh, wait, before I say anything else, I want to mention that I wore Del Sol Rock Star on this hike, and had the direct, scorching hot sun on the damn stuff all freaking day and - nothing.  It didn't change colour.  I was so disappointed, since Ruby Slippers had worked so awesomely :( I SO wanted it to turn that gorgeous aqua green colour that I've seen in pics, but nope - nothing! And then it chipped badly while I was hiking :( So I just got pissed off and took it all off without taking a pic. Which I really should have done to prove that it didn't change at all :p Oh well - I'll probably give it another chance, and I'll show you then. But I mean, I'm not really surprised - Scrangie took down her reviews of Del Sol because a lot of people got "defective" bottles that don't change colour, but the company was hard to deal with when these people wanted refunds or replacements. Oh well. Lesson learned - not all Del Sol polishes are made equal. Buyer beware.

Anyway, where was I... oh yes, I was waiting for the boyfriend to get his knee looked at when I suddenly noticed/remembered that the Dr.'s Office that I have been going to since I was an infant has a drugstore just a few doors down from it.  An ancient, ancient drugstore that had been there since before I was born and I haven't been in since I was about five, when my mom would occasionally bring me in for a fifty-cent can of Coke after my Dr.'s appointments.  It's like, how can I not have gone in here by now?  Especially with the frequency of my doctor's visits  =/

Anyway, I'm building up to nothing here.  I went in, looked around - they didn't have much.  I did manage to find a couple of things, though... 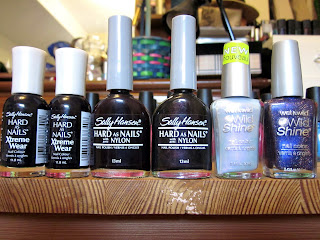 L-R: Old SH Xtreme Wears in Midnight Navy and Down Pour Blue, Old SH Hard As Nails in Radish and Beet Red, and Wet N Wild Shameless and Wild Orchid.  The good part was everything was either a dollar or a dollar-fifty.  They had all been marked down multiple times.  But still, for how old and decrepit this place was, I was kind of expecting their entire store inventory from 1995 or something. 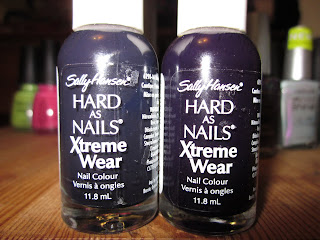 Close up of Xtreme Wears.  They look identical but are slightly different.  Down Pour Blue, on the right, is slightly darker than Midnight Navy, as you can see.  I have a couple of older Xtreme Wears with the white cap like this (Lemonhead, Marine Scene and one other one...)  Why'd they change the colour of the cap three times?  First they were white like this, then silver, now they're black...?  Anyway, they'll both likely end up as frankens :)  I'm thinking I'll add some clear to thin them into jellies, and add silver and dark blue glitter.... yes, I'm always searching for that perfect SSN/CDN franken, lol.  If anyone has a really good recipe, please share it with me.  Please? 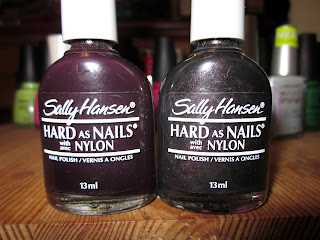 Close up of Radish and Beet Red.  Now that I know these old Hard As Nails polishes are being discontinued (as are all SHs except the current Xtreme Wears, CSMs and Insta-Dris, so I'm told) I have a soft spot for them.  I kind of like vintage polishes in general, and vintage SHs are some of the best.  Some of these old bottles don't fit in my Helmer drawers though - they're too tall.  So they spend their whole lives lying on their backs.  Whores. 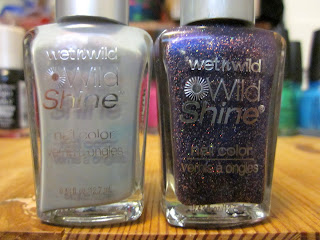 Close up of Wet N Wilds.  I've wanted Wild Orchid for a while now, but could never find it - weird that I found it in this ancient drugstore.  And Shameless looked interesting - pale blue with a purple flash.  It's not really showing up here, but it has a purple shimmer.  And it had a "New" sticker on the cap.  I've never seen this shade in any stores around here either (I thought it was Rain Check at first), but I'm guessing it's probably not "new" :p

Anyway, moving right along, I have some random polishes from the past couple of days to show you as well. 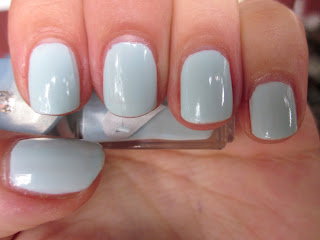 First, I'd like to introduce you to a dear, dear old friend of mine - Hard Candy Sky  :) 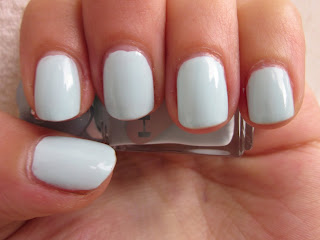 Isn't she gorgeous?  She has a secret shimmer, but it doesn't really show up on the nail.... 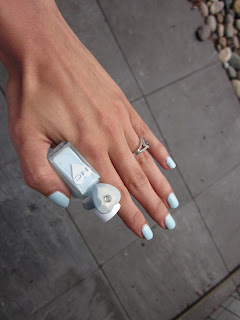 Please ignore the stupid effing flipped picture  >:(  Application was pretty awesome - thin yet opaque formula, nice-sized brush for a mini polish, dried pretty fast....  This was the first one in my Hard Candy set I reached for.  I wanted to save it for a post about the set, but I just had to wear it.  I love this polish.  It has such a soft spot in my heart.  I owned a bottle in 1996, and almost went through the entire thing.  I loved Hard Candy back in the day.  What I would do to get my hands on another full-size bottle of this... I stalk ebay, but never see it...

Ah yes, I wanted to mention this, as well - whenever I'm outside taking NOTD pics, my jealous, mouthy and possibly mentally disturbed cat is doing THIS on my window screen: 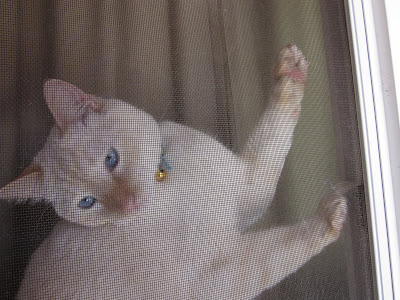 My poor screens  :(  But really, he's an indoor cat - it's not like I can keep him off the windowsills.  I just don't want him to claw giant holes in my screen so that bugs fly in and I have to buy new ones  :p  So, I appease him by showing him what I'm doing, like this: 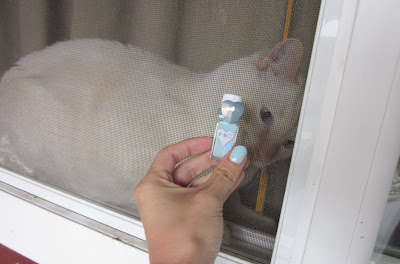 Sid loves nail polish, as we all know.  The sight of the bottle calms him  :)  Yes, that's what I'm telling myself.  So don't be surprised if you see pics like this every now and then. 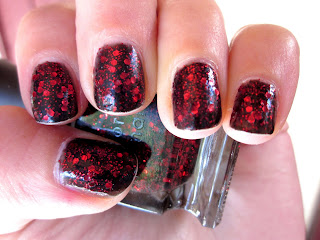 Next, this is Lippmann Ruby Red Slippers.  It's pretty, but I didn't love it as much as I thought I would. 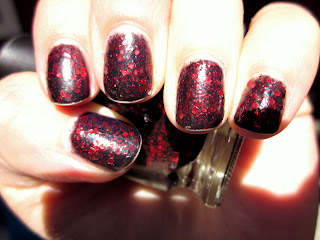 I don't know why.  Maybe I'm just not into the whole Lippmann "deconstructed" look or whatever the hell....  Maybe I don't like the "sequins" she's so fond of.  Maybe I just prefer my China Glaze Ruby Pumps.  I don't know. 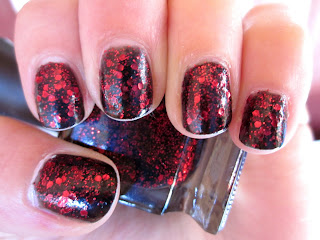 I mean, I still like it.  It still is pretty.  I bet it would look good on my toes.  I wonder what it would look like either underneath or overtop of Ruby Pumps.... hmmm.... 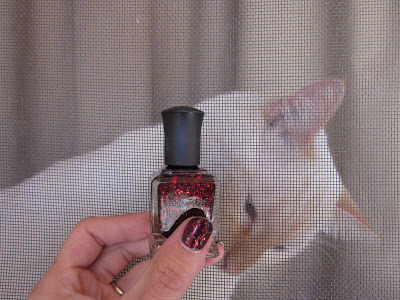 STOP CLIMBING UP MY SCREEN YOU FREAKING PSYCHOPATH CAT!!!! 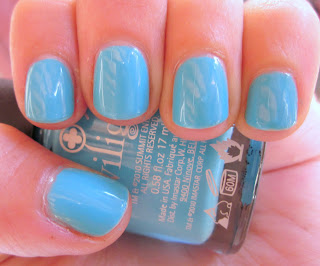 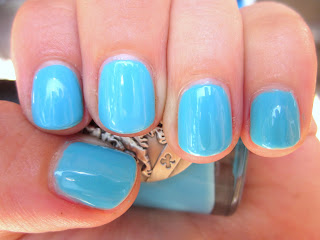 This is a very, very pretty blue - along the same lines as SH Xtreme Wear Blue Me Away! but lighter.  It's greener than OPI No Room For The Blues, and slightly lighter than LA Girls Disco Brites Funkadelic.  The closest polish I have to it is H&M U Must Have This, which is maybe a teeny tiny tinge greener... barely, though.  I really should have done a comp pic - sorry.   My stash is organized by brand, though, not colour, so I didn't really go through it all - just pulled out the ones I thought were closest off the top of my head.  I suspect I probably have a couple of other dupes as well, though - this seems highly dupe-able.... 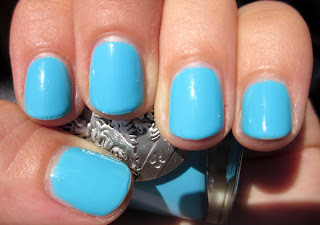 Sadly, for such an expensive, dupeable polish, the application was crap.  Thick, draggy, streaky, bubbly.... ugh.  It's a fairly opaque polish, but's it's so thick.  Needs thinner.  Badly.  And I hate polishes that need to be thinned on the first use  :(  And did I mention these were expensive?  London Drugs' regular price for these is $9.99  >:(  The couple of shimmer Nox Twilight polishes I have (the navy blue, the reddish purple and the rose-gold metallic - I don't remember the names.  they all have stupid, generic names) all apply quite nicely, but I'm wary of the couple of cremes I have now (this, the bright neon pink and the pale ballet pink).  I might see if I can return them.  I can't believe I spent so much money on this stupid collection.  I bought most of them on sale for three to five dollars each, but still - I've never even seen the movie  :p  But yeah, if you like this polish, I'd say try to get your hands on H&M U Must Have This instead - the application is much better.

And I'll leave you with a picture of what I was rewarded with at the end of our long, brutal hike yesterday: 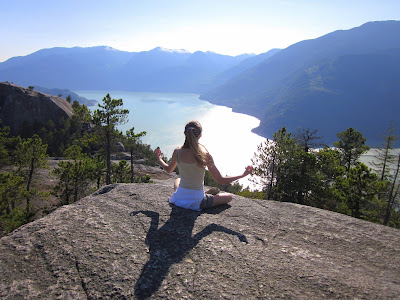 Pwetty :)  Go to Vancouver, drive up the Sea-To-Sky highway and hike up the Stawamus Chief to the third peak.  Great assessment of your own fortitude :)

Wanna quickly hear what my week's like?  Today we're going to the beach.  Tomorrow I'm taking the bf's cousin shopping (ugh, but whatever - she'll have to put up with my polish stops, hehe), and tomorrow night we have to go to see the fireworks again ( doesn't sound like a big deal, but literally about half a million people show up to watch these things :p).  Thursday we're packing and leaving for my friend's cabin four hours away, and then I'm gone till Monday.  I'm so taking polish.  I just haven't decided which ones yet  :D  But yeah, busy week.  I'm going to want to shoot myself by the time I'm packing for the cabin.