Today, I have China Glaze Orange-Pacific to show you, from the Surf 2007 collection. First of all, I'd just like to say the name kind of bothers me. Orange Pacific? How does the Pacific Ocean in any way evoke thoughts of orange? And what's with the hyphenation? I know it's probably just to go along with the rest of their collection's names (Blk-Bila-Bong, White-Kwik-Silvr, etc.... which are dumb names as well.  The spelling? I know, I judge the names so harshly, don't I? Makeup in general - but especially polish - always has the most ridiculous names. If you want more proof, read this blog :) but I still think it kind of makes most people go, "Huh?" Then again, most people don't even read the names. You ask an average person what the name of the polish they're wearing is, or even the brand, nine times outta ten they have no clue... okay, I'm starting to rant again.

Anywho, I'll forgive China Glaze for the name, because this is bright shimmery juicy orange goodness! 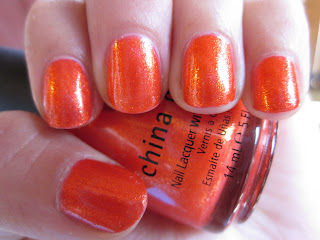 Orange-Pacific is a very bright orange packed full of smooth gold, red and orange microglitter, giving it that shiny foil-like glass-fleck finish that the rest of the collection has. It's so very bright and shimmery - it has that "glowy" quality to it. 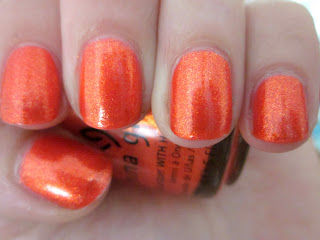 I love it. Orange Marmalade from the Summer Days collection is similar, but much lighter and the microglitter/ glass-fleck doesn't have the same density. This one has a lot more gold in it, from what I can see. The finish is pretty much the same, though, so if you can't find Orange-Pacific anymore (this collection is older - all of mine have older labels on the bottom) you might try Orange Marmalade for a lighter version. 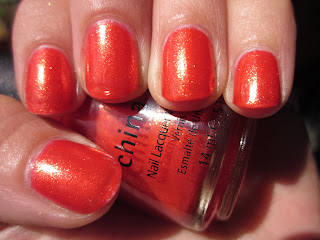 Perhaps because of the old, toxic formula, the application on this was a dream - thin, yet extremely pigmented. Two coats would have been all I needed, but I'm a habitual three-coater. And the wear has been pretty good, although I've only had it on 24 hours - I dented my thumb a tiny bit when it was drying, and there's some very minor tipwear, but all in all, no complaints here :)

Okay, that's all for right now. I realize I still have all that stuff to show you, but I have yet to take pics of it, so..... I suck :p And I've been going out and doing summer stuff as much as I possibly can, so it's eating even more into my blogging time. I'm trying not to be a frail, pallid nerd sitting in front of my computer all summer :p I'm probably not fooling anyone, though. Did I mention how much I suck at frisbee golf? :p

Hope you guys are enjoying the summer too! When you're out doing stuff, having a bright, happy, summery colour on your nails just makes it all the more fun, now don't it? :)

EDIT THREE DAYS LATER: Someone on the NB much smarter than I informed me that Orange-Pacific is supposed to be a play on Ocean Pacific.  You know, OP, the surf brand?  Like all the other names?  Duh.  And it dawned on me soon afterwards that maybe the misspelling is to avoid legal action from the actual surf companies since they obviously didn't have a deal directly with them while making this collection.  I still don't get the hyphenation, though  :p
Posted by AC at 1:28 PM