This isn't really a full-on spam, just a little bitsy mini spam.  I just wanted to prove to you that even though I've been working a ton and not really allowed to wear anything interesting on my nails (and when I am, I'm not allowed to change it), I am still diligently photographing what I do have on, and obsessively changing it in my spare time every chance I get :p  Yup.  This is me.

I'll start with what I have on tonight - my Freehanded Cloud Mani That Didn't Turn Out As Nearly As Cute As I Pictured It In My Head: 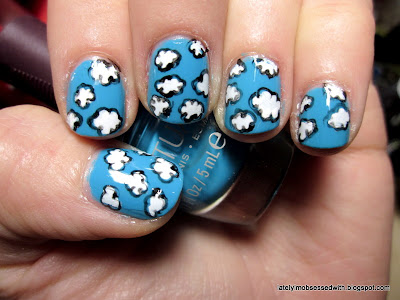 It looks a lot less messy IRL :-/ I swear it acutally looks half-decent - here in macro it just looks smudgy and sloppy. I wanted to do a cloud design but my cloud Konad plate walked away on me :( So I freehanded them by just doing a bunch of dots close together, but I didn't think they looked like clouds (my bf said they just looked like smudgy white blobs) so I outlined them in WnW Black Creme using a toothpick. Like I said, it looks better IRL. The base is SpaRitual Sky's The Limit. 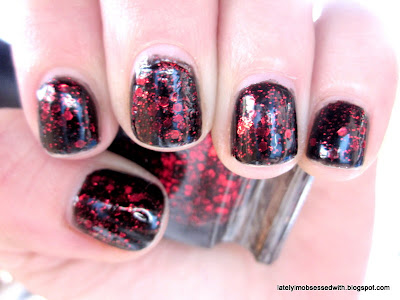 This is the Lippmann Ruby Red Slippers mani I had on for three days straight due to work.  I used two coats of China Glaze Lubu Heels as a base, then followed it with three coats of RRS.  One coat of Gelous, one thick coat of SV, and a coat of Barielle Mani Extender applied 24 hours later, and there you have it - it stayed on for three days on set :)  There was some tipwear, as you can see, but no chips whatsoever!  I couldn't capture on camera how sparkly this was.   I know I've worn and reviewed this before, but I just want to say again how pretty this looked under the bright studio lights... The glittery red was was very noticeable and just popped against the black.  I got compliments on it from girls and guys alike!  . 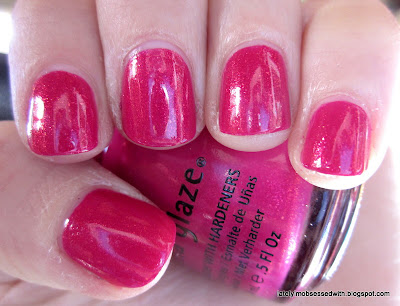 China Glaze Ahoy!  I had this on for exactly 20 minutes before I got bored of it and had to change :S  It's pretty - like Strawberry Field's darker cousin - but I just wasn't feeling it today for some reason.  Which I don't know why, because as I said, pretty. 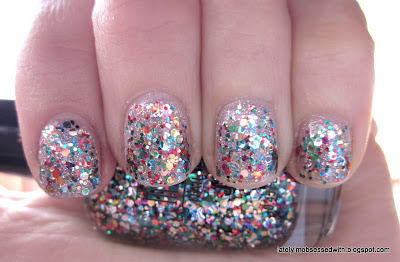 My attempt to dupe SH Frock Star.  You know those nail stickers that they charge $9 a box for?  Yes, well, I refuse to pay that for something that similar-looking to polishes I already own.  And yes, I know, this isn't really a dupe, but it was close enough for me.  Glittery and loud.  I used CC Magic Attraction, Milani Gems and Wet N Wild Party Of Five Glitters.  There may also be some Zoya Gaia underneath all that as a base - I really don't remember after all that glitter :p  And yes, I do own the SH Girl Flower nail stickers, but those are a different story - you try duping those. 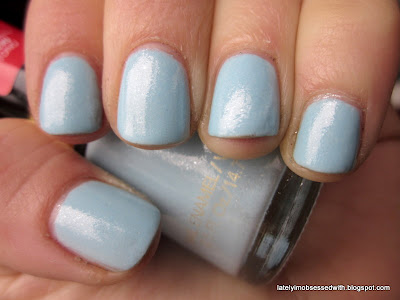 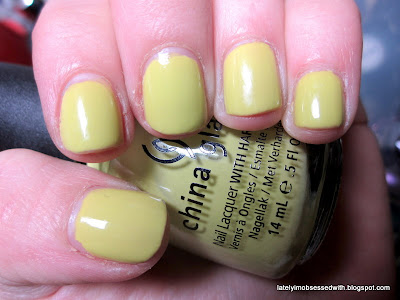 China Glaze Electric Pineapple.  Neither pineapple-coloured, nor electric-looking.  Maybe like a greenish, chartreuse pineapple?  Yeah, sure.  I swatched this on one finger when I reviewed the Island Escape collection, and I said it looked odd - as you can see, I was correct.  It changes from greenish to yellowish depending on whether I'm indoors or out, too. 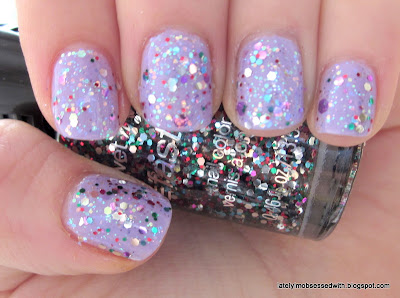 Another glitterbomb mani.  Sometimes I'm just in the mood for glittah.  And I know I'm not alone *looks around at all of you*  This was H&M Lavender Sky, topped with one coat each of Paris Couture iridescent blue-green glitter (a dollar store glitter, similar to Inglot XL4), Fasino purple hex glitter (another dollar store polish that smells like absolute death) and WnW Party Of Five Glitters. 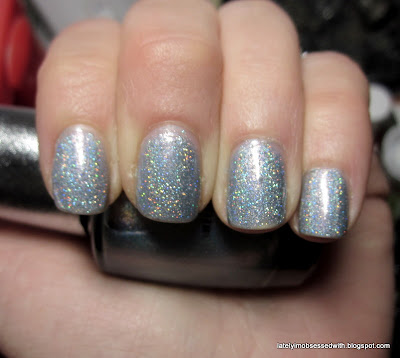 And this was the mani I did to match my blue-grey dress they put me in at work. This was Orly Pixie Dust, OPI DS Sapphire, some no-name Goldie holo and ChG Fairy Dust. It was a gorgeous match for the dress... and then they ended up putting long white opera gloves on me :p Go figure.  I did take my gloves off quite often, though (as would anyone - gloves are a pain), and every time I did I was like, "Oooh!" :)  Polishes always look so good under the bright, hot studio lights - especially glitters and holos! :)

Alright, that's all for right now! :)  Will be back later!

Oh, and PS:  Would you guys be interested in seeing more stash pics?  Maybe my China Glaze drawer, or my HE drawer?  LMK!
Posted by AC at 12:49 AM