OPI Pirates Of The Carribbean Collection - Well, The Ones I Picked Out, Anyway

Hello!  So my Pink Wednesday post will just have to wait, because I happened to find these today:

Yup, that's right - I happened across a new, full, unmolested OPI Pirates Of the Carribbean display today at the mall.  After stalking this collection for the last week or so to no avail, I remembered the frenzy surrounding the last OPI Shatter colour and quickly grabbed two of the suckers.  Happy dances were performed on the spot.

I looked over the other colours for quite awhile and was largely unimpressed by the swatches, just as I was online.  I ended up getting three of the colours - the only three that really interested me - and leaving the two pinks (because yawn) and the aqua Mermaid's Tears (because I'm convinced there's a dupe that I most likely already own).  However, after coming home and swatching the ones I did buy, I'm almost wanting to go back and snag the other three.  Although the application wasn't the best I've ever experienced, I love these on me a lot more than I thought I would :)  No outdoor pics 'cuz it's kind of nighttime, sorry.  All of these are without topcoat too, except for the Shatter. Stranger Tides.  Probably the most unique one out of the collection.  Reminds me of Sew Psyched and Color Club Sheer Disguise, although neither are dupes.  I think this kind of almost "dirty" mint green works on me a lot better than a lot of blue-based mints.  Even mint greens that have a lot of yellow, such as Claire's Dreamcatcher, still make my hands reddish, but this one doesn't seem to :)  If it kind of looks like it in this pic, it lies. Application was a bit annoying - streaky and left bald spots on the first two coats.  This is three.  It dried pretty fast though, which probably accounted for the streakiness.  (Sorry for the crap picture - photographing my right hand is flippin' impossible sometimes -___- #n00b) 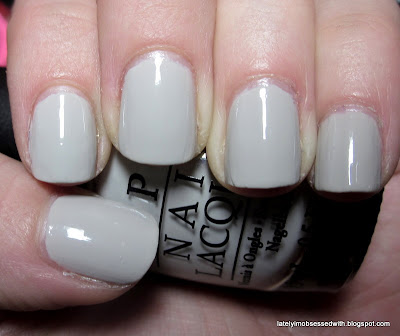 Skull & Glossbones.  I loved this one too.  Some pale greys make me just look yellowed and gross, but I like this one on me.  Quite a lot, actually.  It almost looks a little blueish here (or maybe that's just my monitor) but I assure you it's not.  It's a very yellow-toned dove grey - more yellow than Zoya Dove.  Again, application on this one was pretty much the same as Stranger Tides - streaky, bald spots, and cuticle drag if I wasn't careful.  Something told me I wanted this when I first looked at swatches online, and now that I see it on me I'm so glad I decided to just shut up and buy it after standing there with it in my hand in the middle of the store for about an eternity. 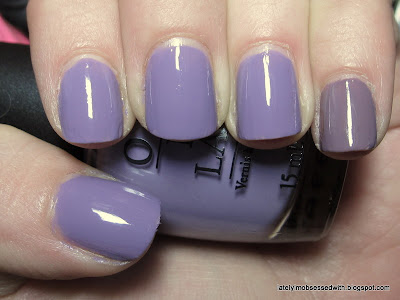 Planks A Lot, with Parlez-Vous OPI? on my pinky for comparison.  Slightly greyed-out purple, so of course I had a #$!*% of a time photographing it, trying to get it to not look blue.  As you can see, I failed.  It's a lot more red-toned than it looks here, and with a heather grey cast to it.  This one gets a thumbs-up too, although maybe not as enthusiastically as the first two.  Application was nowhere near as bad as the first two, though - I was able to get it looking decent in two coats.  This drew comparisons to the now-discontinued PVO? when promo pictures were first released, but I don't really think they look alike at all: 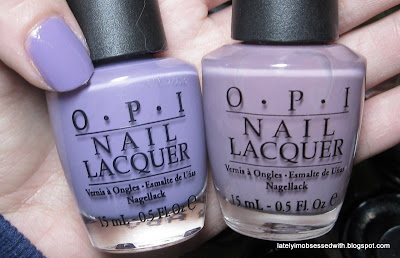 Left, Planks A Lot.  Right, Parlez-Vous OPI?  PVO? is much more brown-based.  PAL is like the love child of PVO? and Do You Lilac It?  Which I should've included in the picture, but I fail  :s

And I saved the best for last: 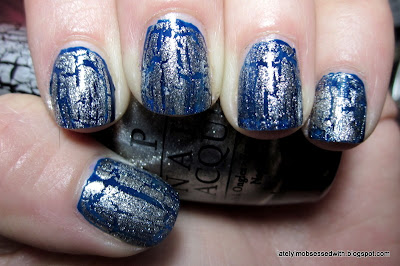 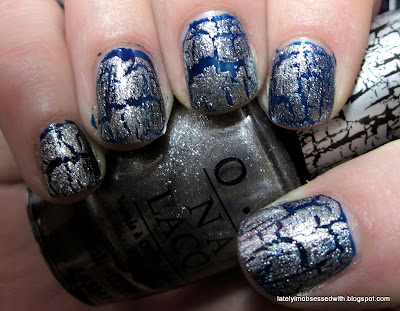 This is Silver Shatter overtop of China Glaze Calypso Blue.  I tried to find an OPI to layer it over, but believe it or not, out of my vast OPI collection I couldn't find a suitable dark blue creme.  So I cheated with China Glaze, who's my true love anyway :)  It cracked nicely, although you do have to take care to apply a thick enough coat.  And no, I didn't layer it over the polishes from the collection. I know I'm a'sposed to, and while I think it looks okay over them and all, I think it's most striking over darker colours :)  Although I'm dying to try it over a white.  And maybe do some striped skittles with it?  Oooh, I can't wait to play around with this.  I have a feeling it'll be on my toes, eventually, too :)

So those are the ones I picked up.  I'm in love with the Silver Shatter, and the other three are definitely each getting worn soon as well.  I think the entire collection goes perfectly with the soft florals and woven fabrics we're seeing everyhere for spring and summer, and the polishes have a pretty, romantic feel to them in my opinion, despite the theme.   Like I said,  the desire to go back and get at least the light pink is growing strong in me....  The Silver Shatter is clearly the star here, though (the salon I went to had three left, of which I bought two, and as I was paying the other one was put aside for someone on the phone.  By the time I left the mall an hour or two later, every display that I had passed by had been stripped of the Shatters!)  I would love to see an entire collection of metallic shatters (what's that, you say?  China Glaze has already announced an upcoming collection of these?  well naturally!  I'll get back to this later when I find out more...)

Now I just need that collection of OPI Shatters to be released, along with the Serena sets, and my OPI lemmings will be fed for awhile :)
Posted by AC at 4:01 AM