Okay, so this started out as just a post of what I've hauled this past week, but then I thought, what the hell - I'm going to do a post of every single thing I've bought this year so far.  Wanna stop reading?  I don't blame you :p

I don't know if I should do most recent to oldest, or....?  I guess I'll do it from oldest to most recent.  Keep in mind, those of you thinking I'm some spendaholic freak, that this is for this entire year so far.  Some of these are swaps, as well.  Oh, I'm just going to stop making excuses for myself - you know you're all just as bad as I am ;p

Ready?  Grab some chips and turn the TV to something boring :) 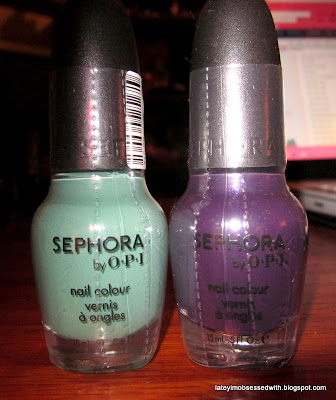 Sephora by OPI Read My Palm and Just A Little Dangerous.  Two I'd been lemming for a while - I only had a mini of RMP. 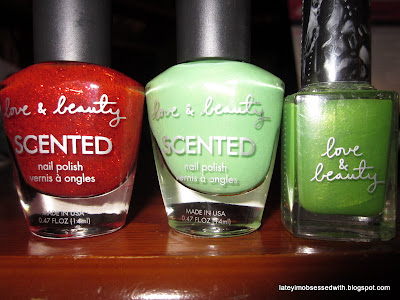 From Forever 21, Love & Beauty scented polishes in Peppermint and Kiwi, and a regular polish in Lime.  These do smell, although not very good - the scent reminds me of those scented fat felt pens we had when we were kids. 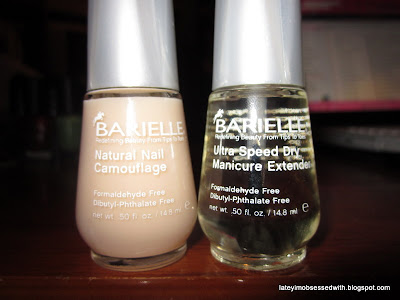 Boring stuff - Barielle Camo and Mani Extender, found at Winner's for $5 each.  After I bought these, I walked into Eterna Skin Care on Robson and saw Camo for $18!  D:

But oooh, this is exciting - the Dare To Wear Disco Tech collection!  Hee.  I like glitter.  I just noticed that my older polishes from this brand are spelled "Dare 2 Wear".  Huh. 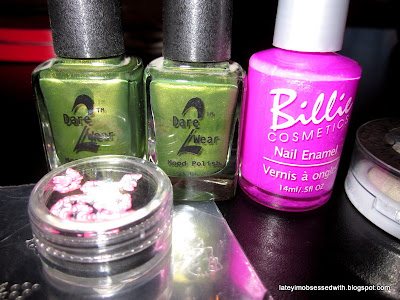 See?  See?  I told you!  This is Hunter Green x2, Billie Purple Haze (awesome neon purple with subtle shimmer, and only a buck!) and some little butterfly decals I found - which are sitting on top of a Hello Kitty fauxnad plate :) 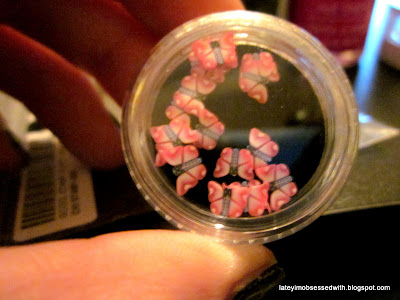 Aren't these adorable?  I got these so I could copy this mani that I saw on Chloe's Nails.  It's so simple, but so adorable - one of my favorite manis of all time :) 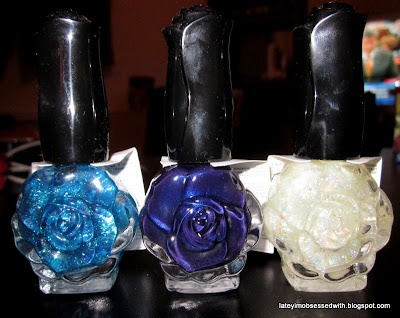 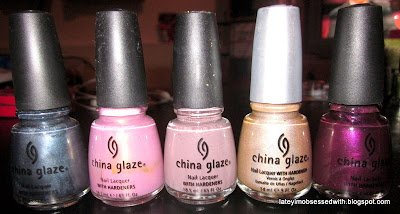 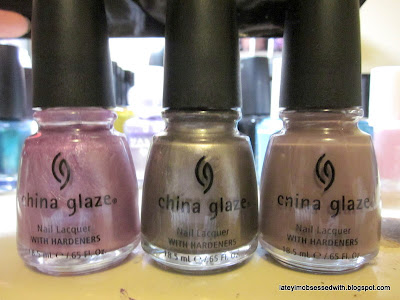 Now, we move on to our OPI part of the presentation:

OPI Texas collection. L-R: Y'all Come Back Now Ya Hear?, Big Hair..Big Nails, Guy Meets Gal-veston, That's Hot! Pink, Do You Think I'm Tex-y?, Houston We Have A Purple, Austin-tacious Turquoise and You Don't Mess With OPI!  These names get worse with every collection :p 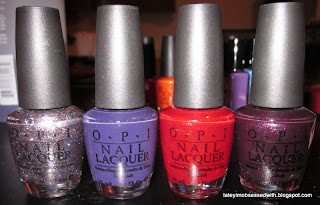 And dusty finds!  Awesome dusty finds!  L-R:  Mad As A Hatter, Sapphire In The Snow, Smitten With Mittens, Merry Midnight.  I already own all these, but backups, swaps, you know how it goes... :)

And that concludes our OPI portion of the evening, now how about some Daiso finds? 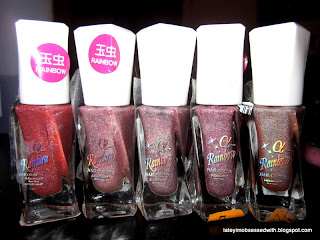 OMGHOLOsqueeeeeeeee!  <--- iz what I did when I found these in the store.  These are the "Rainbow" line of polishes, they are pretty holo, and they are fantastic!  The three in the middle look like they're the same, but they're actually three seperate colours.  But aren't these just the FUGliest bottles you've ever seen?  Daiso has some seriously ugly bottles, man. 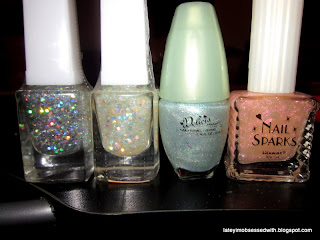 Like check THIS out.  These are all very pretty - a chunky silver and holo hex glitter, iridescent hex glitter, a blue that looks really frosty and horrible here but it's actually very silvery and pretty, and the one on the end is called Aurora Lights and it's basically an exact dupe of CND Crimson Sparkle.  But those first two bottles are seriously some of the most ridiculous-looking things I've ever seen in my life... 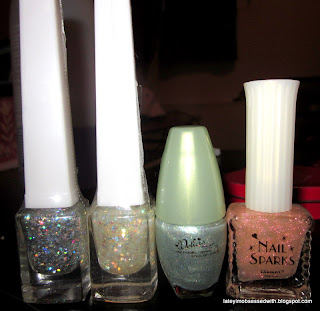 SEE?!?  Like, seriously?  What the hell is that thing?  A nail polish bottle or the frickin Empire State Building?  I think the folks at the Winmax must've just done this for a laugh  :p

And look at this! 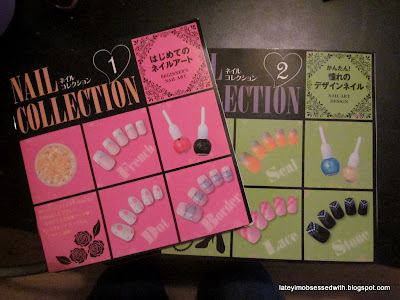 Aren't these cool?  Anyone know how to read Japanese?  :D  The pictures are SO awesome though.  I'm going to pick a couple of pages and try to scan them like Wan does with Nail Up! magazine over at I Love Nail Polish - a fellow Vancouver blogger, btw :)  And that concludes my Daiso finds!  Back to our regularly scheduled programming. 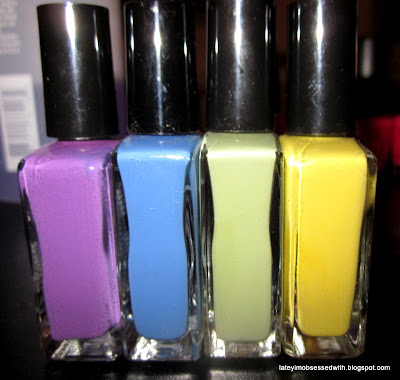 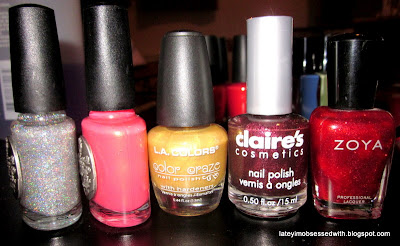 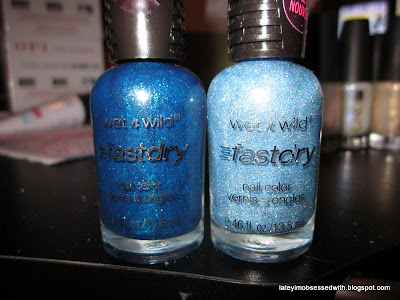 Wet N Wild Teal Of Fortune and Blue Wants To Be A Millionaire?  TOF looks like another Charla dupe, and BWTBAM looks similar to the Justin Beiber Nicole polish Me + Blue, although they're not dupes. 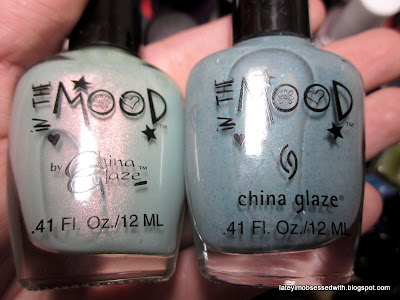 China Glaze mood polishes that - blast it all - have no labels!! :(  Anyone have any idea what these might be?  The one on the left is baby blue with a pinky-gold flash, and the one on the right is slightly darker with blue glitter. 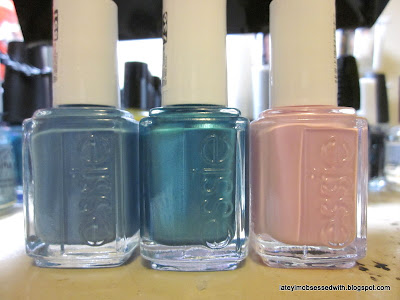 And some Essies - Coat Azure, Beach Bum Blu (frosty and horrible - I dunno why I bought it :-/) and French Affair.
And last, I know no one cares, but some non-nail-polish stuff that I got for cheap: 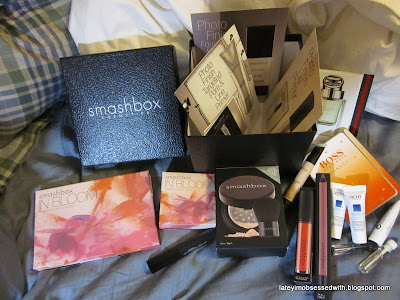 I got my makeup done by a Smashbox artist at SDM, and since I had a gift card I bought two products - the Halo powder and Peony cream cheek colour duo, and the MU artist ended up throwing in all this stuff for free!  She threw in a full-size lipgloss, lip pencil and concealer for free, as well as a travel-size mascara and a billion other little samples.  I was blown away!  Usually they're just trying to get you to spend money and even when you do, make you feel like you're not spending enough, but she was extremely generous!  Thanks Smashbox!  Oh, and the In Bloom eyeshadow palette I bought at Sephora a few weeks back - happened to grab the last one :)
I started composing this post about a week and a half ago, so I've bought a couple of things since then.  I'll take some photos and get an updated haul post up as soon as I can :)  I've been working lots lately, which I really need.
Crappy Monday :)
Posted by AC at 7:43 PM