I Can't Sleep.... Let's Look At Some Recent NOTD Pics!

So I really suck at keeping promises.... yeah.... you're probably so sick of hearing me apologize too.  Whatever.  On with the blog.
First of all, let me tell you a story.... Lex isn't very good at staying awake lately.  Which is weird - I have had chronic insomnia since I was a little kid.  I'm used to staying awake whether I want to or not - usually way past the point that I want to.  But these days, I come home, blather on to my bf and dork about on the computer for awhile, make dinner, and then I can barely make it through a DVD episode of Lost before my eyes are starting to close on me....  It's really frustrating.  So tonight, Saturday night, I decided to chug a can of Red Bull in order to not fall asleep in front of my friends during the hockey game.  Hence, this post at 5 in the morning.  And this is after Falling Behind. It's actually 6 in the morning  :(  I love my Red Bull, and it's helped me through some tough times, but lately the stuff has such an adverse, hateful effect on me...  Anyway, the end....  Because of this, I can't sleep and you get this cracked-out-sounding post!  High fives!

In other news, I bought another Helmer, and am in the midst of reorganizing my stash.... trying to figure out what goes in what drawer and what deserves its own drawer and all that....  I thought it'd be more fun, and, I mean, it is kinda fun, but it is kinda just like cleaning.... I need to massively de-dupe, I'm realizing as well  :-/

In other other news, I found all the holiday China Glazes except for... well, like half of them.  My Sally's is ballz.  I still need Peace On Earth, Little Drummer Boy, Frosty, Mommy Kissing Santa and those two golds...  Problem is, no one place has all of them in stock  :(  At least I got my greedy mitts on Party Hearty.  We all know that's the important one :)
So anyway... who wants to look through some old NOTD pics?  yaaay!  Well, they're actually pretty recent... 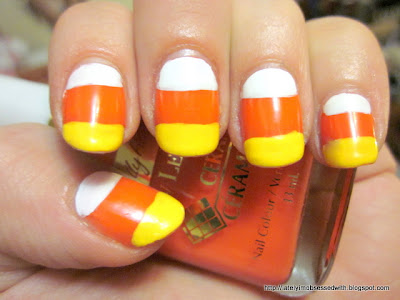 My sloppy execution of the candy corn mani.  Did this sometime during the week of Halloween....  I used.... 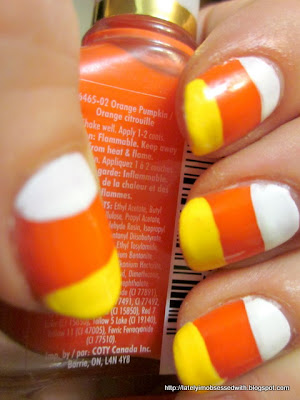 An old Sally Hansen Halloween exclusive from a few years back, Orange Pumpkin.  Yes, the point of me taking the pic like that was so I didn't have to type that, but let's move on....  Maybe it was just last year's release, I'm not really sure.  Anyway, I used the yellow and white SH Insta-Dris for the rest (Lightning, and... I don't remember...) Also, I freehanded the lines, because I couldn't find any tip guides.  Or tape.  Don't hate. 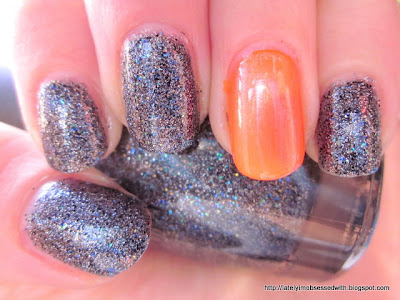 Another Halloween mani.  This is Sephora By OPI If You've Got It, Haunt It, with Color Club Tangerine Scream on the ring finger.  IYGIHI was one of the Halloween-exclusive $OPIs, along with Kitty Loves Black and that glow-in-the-dark white, and my fave of the three by far.  It's a black glitter in a base of grey microglitter, and there's some blue and pink in there too.  Gorgeous and unique in my stash.  I can't find Nicole Pitch-Black Glimmer anywhere, and this fulfilled that lemming nicely. 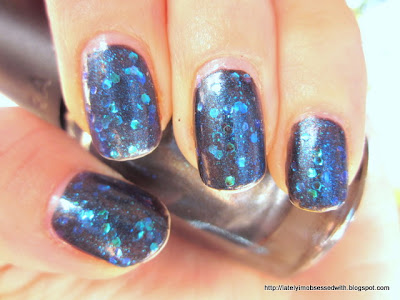 This is a Kiko Cosmetics #270 overtop of $OPI Kitty Loves Black, which was a black with pearly blue microshimmer.  Kiko 270 I've shown on top of $OPI Read My Palm before, but it shows up much better on top of a darker colour like this.  The paillette glitter reflects different colours at different angles - purple, blue, teal and green.  These photos are blurred but you can see some of the colours of the glitter... 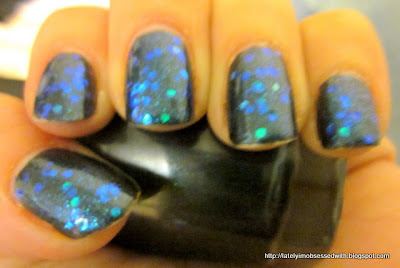 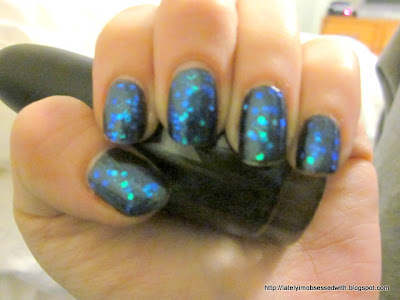 It is really quite stunning IRL... very Across The Universe-ish.  I love this polish.  I got it in a swap from Italy - I wonder if there's anything similar on this side of the pond...

This was my anniversary mani, for my 3-year with the BF... 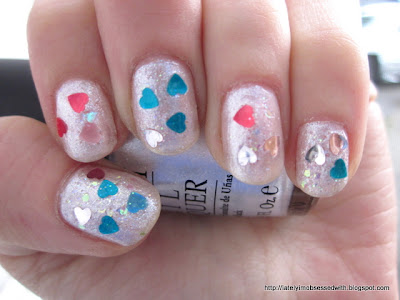 Cheesy, yes, but that's what I was going for :) 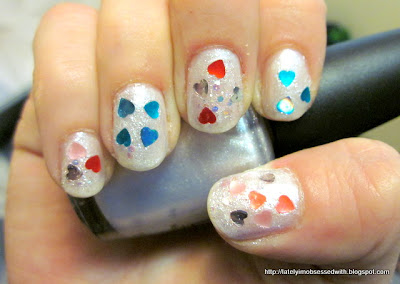 I used (what else) OPI Happy Anniversary! and layered various heart polishes overtop.  I actually kind of went crazy with the heart polishes.  I pulled out every one I own and started slopping them on, flinging hearts this way and that....  There's a couple of Nicole ones (Love Your Life, Have A Heart, Honey-dew You Love Me, Spring Romance) a Claire's one (Love Struck), some random no-name dollar store ones...  Yeah.  It doesn't look the greatest, I'm aware - the repeated application of the thick heart polishes turned the finish of Happy Anniversary all gungey and gross-looking.... but it served its purpose.  Boyfriend liked it :)

And last, but not least....  I have a random no-name dollar store polish for you!! (don't you hate those? :p)  I've been combing Asian dollar stores recently.  Being in Vancouver, I walk past a ton of them all the time, and decided to start exploring some.  Well, look how glad I am that I did! 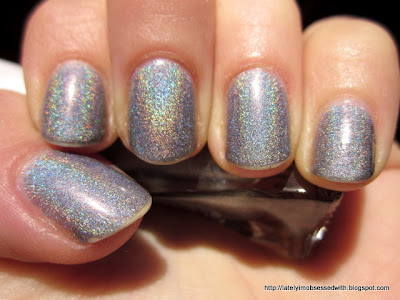 I found this gorgeous grey holo polish in one such store.  It was $2, has no name and comes in a fugly-ass twisty bottle.  But look how prettyyyyyy! *_* 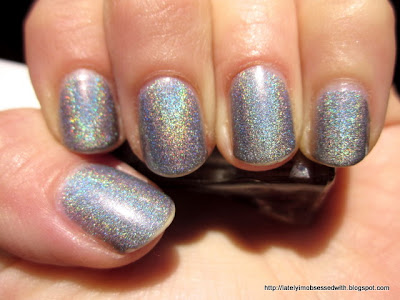 I love me some holo.  And this has got good holo :)  I also picked up kind of a rusty-reddish looking one that also looks kind of holo, so hopefully that one'll turn out to be as nice as this one!  I scored a bunch of stuff at that store and stores like this recently, and I'm going to have an upcoming post dedicated to my dollar store finds. Most of them are random Hong Kong and Korean brand polishes, they're cheap, and they're all kinds of awesome :)  I'll also include where I found them all, in case anyone's in Vancouver.  (And in case you're interested, I found this particular one at that Daiso-type dollar store in Tinseltown by Stadium Station  :)  Or what used to be Tinseltown.  I don't know if it's still called Tinseltown.  But you guys know where I mean, right?  I'm sure it'd probably be at Daiso, too, since this place seemed to have pretty much the same stock as them...)

Well, I have run out of pics for you right now.  But do not fret - I shall return with more stuff I promised I'd do.  Seriously.  I will.