So all I have to show you today is a bunch of stuff I've gotten in August.  I got this stuff over the course of this month from TD, swaps or stores.  And I'm just gonna jump right into it this time  :p

Most of this stuff you will have already seen before and will be totally boring.  Sorry :(

First of all, my China Glaze Vintage Vixen set.  I got Goin' My Way, Riveter Rouge, Classic Camel, Emerald Fitzgerald, Midnight Mission and First-Class Ticket, and then I also ordered Ingrid.  I'm liking most of them, but to tell the truth I wasn't horribly impressed with this collection.  The colours just don't seem that unique.  I don't really like Goin' My Way (brown is probably the one polish colour I'm really not a fan of - I probably only have like three "actual" browns :p), and Classic Camel is guaranteed to look like puke on me.  And I'm kind of blah about First-Class Ticket as well.  Another blue-purple shimmer?  :-/  The rest look good, though.

Next, OPI's fall Swiss collection.  My selection from the collection, anyway.  I got Glitzerland, Lucerne-tainly Look Marvelous, The Color To Watch, Yodel Me On My Cell, Ski Teal We Drop, Cuckoo For This Color and Color So Hot It Berns.  CSHIB was a last minute addition.  I found these all at the same B&M salon I got the Shreks at a few months ago - they seem to get OPI collections faster than anyone else, and it's awesome. 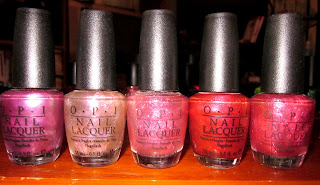 May as well continue on the OPI tangent... This is what I've amassed so far of the Holiday On Broadway collection.  L-R: Movin' Out, Rent, Mamma Mia, Man Of La Mancha and Thoroughly Modern Millie.  I got some of these from swapping, and some from TD (they're out of MOLM, though).  Notice anyone missing, anyone very important?  Yeah.  But I'm not paying $40 for it on ebay.  I really can't justify that :(  Maybe for Christmas. 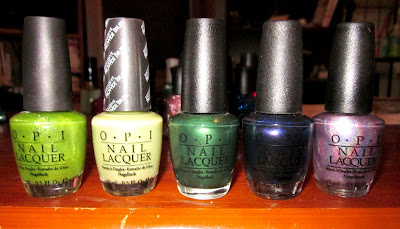 More OPIs :)  L-R: Call My Cell-ery, Sit Under The Apple Tree, Rainforest (!), Glacier Bay Blues (!) and Sand-erella (!!)  The first two came from TD, the rest are all from awesome swappers :)  Soaper1 gave me Rainforest, and yelly21 is beyond awesome - I swapped with her for Sand-erella, which I'd been lemming forever, and she inlcuded another one of my all-time biggest lemmings - Glacier Bay Blues!! :D  I've never received something that's on my top ten biggest lemming list as an extra!  I was touched.  The NB is so awesome :)  I can't wait to wear GBB and Rainforest, but I'm trying to save them for fall... 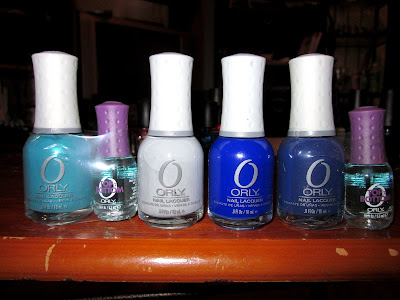 Some Orlys.  L-R: Bailamos, Mirror Mirror, Royal Navy and La Playa.  I found Bailamos and La Playa at Shopper's Drug Mart, of all places!  I guess some SDM's have Orlys. now?  And free top/base coats!  Royal Navy was on my want list for a long time now - finally caved :) 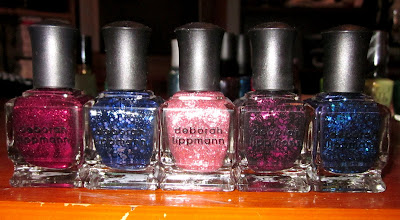 Ahhh, my eyes!  OPI Need Sunglasses!!  Haaaaaaa......... I'm not funny.
Srsly though, these are the coveted Lippmann Nordstrom exclusives.  L-R: Razzle Dazzle, Lady Sings The Blues, Some Enchanted Evening, Bad Romance and Across the Universe.  I love AtU, and I'm wearing Razzle Dazzle right now and I really really like it too.  I'll probably post a NOTD pic later on, so I won't go into too much detail now...  I've heard that LStB and SEE are both kind of disappointing... SEE kind of looks like a 99 cent Sally Girl polish.... but I'll try them anyway.  Since I can't return them :(  Hey, could Some Enchanted Evening be called Salmon-Chanted Evening?  Cuz...y'know.... it's pink?  OMG why am I actually making an attempt at jokes.  I should just hang myself for that one.  Or go work for OPI  :p

Okay, so these are not new, really, but I just noticed the other day that I've collected quite a few RBLs just from swapping.  Which is awesome.  Cuz these are spendy.  These are the RBLs I own: L-R: Lulu, Om, Starfish Patrick, Coral, Frugalista, Look Rich Be Cheap, Concrete Jungle, Dead Calm and Under The Stars.  I've only worn Starfish Patrick and LRBC.  I can't wait to try these others though.  UTS is one of those "night sky" polishes that I love so much - black with very fine blue and teal glitter.  Love.  Also, why are my bottles different heights?  :-/ 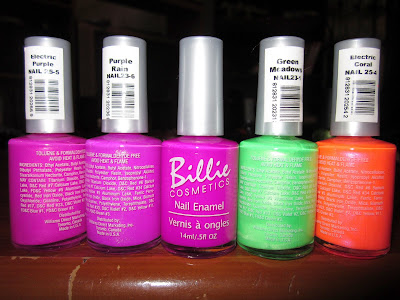 Some Billies I got from Dollar Giant.  I like Billie polishes - pretty decent quality for a dollar each :)  They remind me of old WnWs.  The one in the middle is called Purple Haze.  The old man at the checkout at DG that rang them up for me said, "Aren't these three purple ones the same?"  "No.... they're.... actually slightly different...." I said, feeling like a certified lunatic.  That's pretty much the look he gave me, too.  Like, you have problems, lady  :p 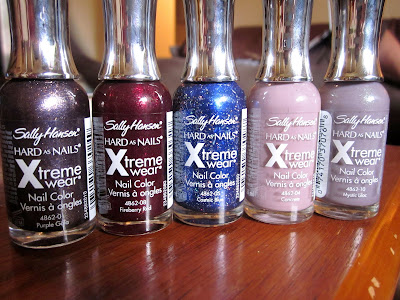 And last but not least, I found the new fall Sally Hansen Xtreme Wears :)  In case you can't read the bottles, I picked up Purple Gala, Fireberry Red, Cosmic Blue, Concrete and Mystic Lilac.  These were the ones that appealed to me most.  I will admit, though, that after I bought them, I sat outside the store with my iphone searching the NB for any mention of these, just to see if there were any good ones that I should go back and get - hahaaaaa  <----------- iz dork.  I think my instincts are pretty spot-on, though  :)  I haven't seen any mention of Cosmic Blue, but it's the kind of polish that would probably appeal to me more that it would most people.  It's got bar glitter in it, ppl!  :D

Alriight, I will be back with a quick NOTD, and I know I promised you those stash pics, as well.  Also, expect another GIANT haul post in the next week or two :)  I have a huge, huge swap (huge.  like 100+ polishes huge :O) coming in the next few weeks here with all sorts of awesomeness in it that I can't get in Canada (she should get her end any day now, and should be mailing mine right after :)... and then there's the TD order I pulled the trigger on the other day with all the Halloween and Winter collection goodies coming in it!  :D :D  Good stuff like China Glaze Awakening, Orly Tis The Season, Color Club Untamed Luxury and (oh man) Orly Cosmic FX!  *squeeeeeeeeeeeeeeeeee!!!  So yeah.  Lots of stuff in the next few weeks.  I iz excited  :)  And I plan on picking up Jade Dragon and Bad Fairy from MAC, but other than that, it's a no-buy until those OPI Burlesque glitters come out!